Teaching Your Children to Prognosticate

We live in a world of orthodox myth; the stories we tell ourselves about the world become the world to us. Even when some of our myths are exploded, they turn out to be so embedded by our cultural memes and temes that it can take a long time — generations — to dispel them, and sometimes they don’t ever dispel, they just go dormant for a while, and then return, zombie myths, to ensnare us all over again.

Zombie myths recycle with special vigor in election years, because patriotism is the stock and trade of scoundrels. Patriotism is the deadest myth out there and the patriotic myths of the USA are among the most obnoxious.

Voltaire said, “Those who can make you believe absurdities, can make you commit atrocities." Indoctrinated from nursery school to graduate school, reinforced by weekly pronouncements from the pulpit and daily television bobbleheads, the gene that helps us accept bulls**t seems dominant in the modern human genome. While one can perhaps point to more dire examples — North Korea, Somalia or Zimbabwe, for instance — the USA’s homegrown mythology seems especially pernicious. It deprives USAnian children of pattern recognition.

In his current stump speech, the international war criminal Barack Obama tells audiences that while veterans were spit on and dishonored when they returned from Vietnam, his administration has extended to those returning from the Middle East nothing but honor. The premise is, of course, false. Historians well know that the myth about protesters spitting on Vietnam veterans was cooked up in the kitchens of the Nixon White House to shame the US public into sustaining genocidal bombing long after that war had become not just a fraudulent cause but a lost fraudulent cause.

Dishonoring Vietnam veterans never actually happened, except when they spoke up about what they had seen, and then they were pursued and hounded by government, much like Obama is doing today to Bradley Manning. Manning is the alleged Wikileaker, and he is being prosecuted for adhering to the Nuremburg principles and refusing to participate in the cover up of war crimes. In actuality, in the Sixties and Seventies antiwar protesters welcomed returning vets to the barricades and handed them microphones so they could describe the atrocities they had witnessed, just like Manning. Why Obama keeps trying to bolster ancient Republican propaganda is anyone’s guess. Yet, it serves to thicken the clouds of deception that obscure our children’s vision.

The releases by Wikileaks that provide fine-grained detail of Allied atrocities in the Middle East explain why the returning Iraq vets, who receive far better benefits and honors than their predecessors, commit suicide in such unprecedented numbers. Their war, like Vietnam, is indisputably an illegal war of aggression under the Nuremburg Principles, and no-one is there fighting “to bring democracy,” “to make sure 9-11 can never be repeated,” or to thwart Muslim evildoers, be they Al Qaida or Taliban. Those are all the convenient myths of the type Voltaire warned us of. Today’s cannon fodder are mere corrupted innocents, and there but for fortune go you or we.

How a nation that directs fascist decapitations of democratic societies whenever it suits a perceived strategic needs imagines it can as easily install a democratic system from the top down, while our lordly Ambassadors don’t even speak the language, is a mystery. Before their multi-trillion-dollar Iraqi Freedom project, Republicans were fond of saying “We don’t do nation building.” Now they fault the torture czar Obama for doing exactly that, using more trillions of tax dollars. The myth is not that nation building can be done or can’t be done. The myth is that we are in the Persian Gulf for any reason other than to secure a continued supply of petroleum. Our children don’t know that. They don’t know petroleum is in finite supply.

Including the 343 firefighters and 60 police  casualties, 2,752 victims died in the attacks on the World Trade Center on 9-11. In contrast, between 2,000 and 5,000 civilians died and 20,000 homes were destroyed when the US invaded Panama in Operation Just Cause, discriminantly leveling entire city blocks to capture a rogue secret agent who was taking away the drug trade from the CIA and turning it to his own uses. In CIA parlance, the collateral damage is termed “bug-splat.”

Is there an Islamic Cultural Center in that part of Panama City today? Sure is. El Centro Cultural Islámico de Colón, on Central Avenue. Panama has 10 mosques. Maybe a better question is whether there are Christian Culture Centers close to the destroyed neighborhoods, since Panama was attacked by Christians — Just ‘Cause. Is this being taught in our schools? Would the average college freshman know what Operation Just Cause was?

The Saudis (not Iraqis) that took over the airplanes that crashed into the Trade Center and Pentagon on 9-11 were “terrorists,” our children are taught. Coalition soldiers who shoot disarmed prisoners at checkpoints in Iraq are “patriots.” (One of them is even standing for election to Congress next Tuesday after being court-martialed.) Both of those terms are mythic appellations. What is a “patriot” when lethal force is employed to defend lands stolen from indigenous peoples who have been displaced, impoverished and killed? What is a “terrorist” when one is fighting back against foreign aggressors?
We don’t even have a word for the faceless people in windowless buildings near Las Vegas, Nevada, who launch hellfire missiles at wedding parties or funeral processions from silent, unseen drones flying over Pakistan. They are myths in waiting. They do not exist in our children’s textbooks.

Turning to the election prattle, why are single payer medical systems “socialist?” What is so evil about “communism?” Weren’t Jesus Christ and the 12 apostles practicing communists? Didn’t J.C. chase the money lenders from the temple? 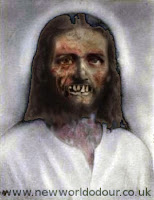 But then, who was Jesus? Was not that whole New Testament narrative cobbled together from pre-existing stories that were centuries and millennia old by the time J.C. was supposed to have been born? Haven’t morphing storylines also given us the Virgin of Guadalupe? The Book of Mormon? UFOs?

Our bicameral brains seem to have a metaprogram that drives us to create an alternate narrative, a sub-text to the drama we see going on around us. For some of us, that takes the shape of demons and devils lurking in the shadows, waiting for a chance to destroy us. For others, it is an epic battle, one in which we are cast on the side of good, predisposed to undergo great sacrifice and deprivation of all manner of pleasures to ensure a favorable outcome. For still others, there are unseen, super-intelligent forces at work; aliens, quasi-military security apparati, and Bilderberg conspiracies.

Whatever your poison, there is an echo chamber where your illusions can be rendered perfectly sane. Maybe it is Glenn Beck, or maybe it is your 5th Grade Civics textbook. The Great War was due to the assassination of Serbia’s Archduke Ferdinand; Kennedy was killed by a bullet fired by Oswald, acting alone; the US elections of 2000 and 2004 and the Mexican election of 2006 had nothing to do with Diebold voting machines; obesity has nothing to do with Frankenfoods, high fructose corn syrup or bovine growth hormone; the Great Recession will soon be over; homosexuality is a promiscuous aberration; and nuclear power is clean, safe and too cheap to meter.

Orthodoxy is supposed to serve a social benefit. It is supposed to cleave us to the narrow track that provides sanity and avoids the pitfalls history has warned us of. Problem is, our cultural orthodoxy is now sending our children in the wrong direction. It is leading them off the cliff of moral disambiguity to the rocks of pummeled hubris. And because of deliberately impaired perception, they will never see it coming.

The scary part comes when some of them decide to break out of the realm of myth and stare at unvarnished reality. Frederic Nietzsche said, “If you gaze long into an abyss, the abyss will gaze back into you.”