How To Turn Your House Into A Grain Bin

We are teaching a permaculture design course near Nashville, Tennessee at a recently constructed subdivision called Carothers Crossing. Driving to our classroom, normally Sales Office for the scores of cookie-cutter MacMansions littering the Crossing, we immediately appreciated why these people had need of such a workshop.

All around us, for mile upon mile, 5000 to 15000 square-foot buildings loom like sentinel giants over rolling fields of manicured grass that two years earlier had been planted in hay, corn and soybeans. The centuries-old farms that had raised horses for Forrest’s cavalry and fed the doughboys in Verdun had recently been foreclosed, or their aging owners had just had enough, and sold to the developers, who thought the building boom was just on pause, and when the economy came back the ticky-tacky glory of Carothers Crossing would be there to meet the demand. Ooops. 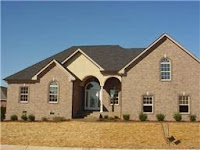 Now it was the developers that were threatened with foreclosure, cajoling their bankers and bleeding off fortunes won in the housing bubble of the previous decade to pay minimal interest until the recession ends. None of them have read The Long Emergency.

In the Sales Office, with its ceiling fans on a columned, wrap-around veranda designed to look vaguely Southern Plantationesque, we picked up a copy of Mother Earth News and browsed to an article on how to turn a grain bin into a house, with several photo examples from Kansas.
Staring out across the fields, we thought, “Hmmm, maybe they should have an article on how to turn your house into a grain bin.”


How To Turn Your House Into A Grain Bin
Many houses built in the past 30 years are not nearly as well-constructed as those built half a century to a century earlier. They have just barely enough building materials to support the second floor and roof, and just enough insulation to insure the local utility a fine income for many years to come. Often they have brick façades, but the bricks have no bearing strength, they are just laid up against the wall for decoration.

If you were to open up a hole in the roof and augur in 100 tons of beans or grains, the house would explode.

So the first thing we need to do is beef up the outer shell. There are several ways to go about this, but the shape of the building and the slope it sits on will be a major consideration. If the building is rounded or hexagonal and sits on level ground, the best thing to do would be to wrap the whole exterior with several lines of 3/8-inch steel cable and tighten those as tight as possible. The more rectilinear the building, the more problematic this becomes because the cable will hold the corners tight but not prevent bulges from the center of the walls.

For rectilinear buildings, as is the case for most MacMansions, it will be necessary to construct exterior buttresses every 10 to 15 feet of wall-span. This is also a good idea on buildings that are built into landscapes sloping downhill, because the weight of the stored grains will put pressure on foundations and cause the entire structure to slide in the direction gravity is pushing. For this reason, buttresses should be anchored deeply into the ground with a “T” shaped footer, opposing the vectors of force emanating from the building.

Once the exterior has been braced, we can begin rearranging the interior of the building to make it more suitable for its task. Because houses have many rooms, a useful re-purposing might be to keep those rooms but divide them into different storages: the master bedroom for wheat; the guest bedrooms for rye, barley, and buckwheat; the living room for maize, and so forth. Rather than attempt to shore up the second floor or attic to support the enormous loads, it is probably be best just to cut those floors away, using a chain saw. 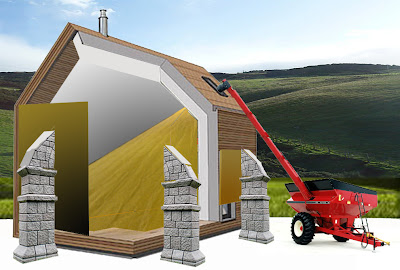 Windows and doors are for the most part useless, and can be replaced with solid wall, except where grain take-out chutes are needed. You will need to retain access to get in and sweep once the grain from the previous year’s harvest has been exhausted. Any openings in the building will need to be carefully screened or sealed to prevent access by rodents and insects.Storage of fruit, potatoes, squashes, cabbages, onions and other produce is possible but tricky for beginners. Maintaining separate rooms will be a help here. Onions and apples give off gases that can rot potatoes and grains, for instance, so by separating the different storages in sealed compartments that vent to the exterior, spoilage can be minimized.Grain cannot go straight from field to storage. It needs to be dried. Although solar drying is the least energy-demanding, that will not be possible in all climates in all seasons, so converting a small outbuilding like a four-car garage or pool house into a grain drier is a good investment. A biomass-burning biochar-producing heater and fan is probably the most practical approach for indoor drying in most climates. This is carbon-negative, can use spoiled corn, grains and chalf for fuel, and will produce biochar for a soil amendment as an added benefit. 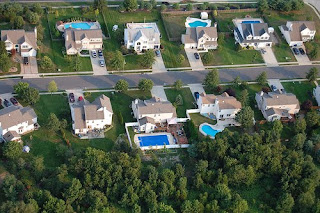 Access through the roof of the house will be useful for grain storage purposes, and an access hatch can be cut to allow an elevator to be fitted or an augur to lift the grains from the truck into the building. With energy costs at a premium, it is important to let gravity do as much of the work as possible, so once the building is full, that hatch can be sealed and the ground-floor chutes are used to remove the harvest for consumption or transport to the bakery, distillery, or processing plant. Other MacMansions in the neighborhood might serve equally well re-tasked as flour-mills, bakeries, canning and freezing operations, cold-storage plants, or animal barns. Proximity here is a benefit, because it reduces transportation requirements to distances easily covered by horse and wagon. 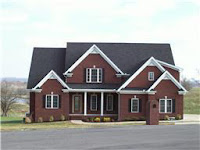 As we look around at Carothers Crossing, with prices on vacant buildings ranging from 170,000 to 700,000 (the currency denomination is probably meaningless, you get the idea), we can imagine that in just a few years these unoccupied monstrosities will sell for 17,000 to 70,000 if buyers can even be found then. More likely, they will sit until they start to leak or burn, and then they will be torn down for salvage materials.

Wouldn’t it be better to find some more useful purpose for these fine structures, sitting as they do, in fertile farmland?

Oh my God!!! Now I can stop worrying about what people will do with their McMansions in the Legend at Bergamont - i.e. the premier golf-course community in the Madison, Wisconsin area! Geez, it's been keeping me up at night.

You know, many of the MFers who live there know what I think of their precious Lifestyle. Given the fact that I ride my bicycle almost everywhere around here, I'm sort of surprised that no Bergamontean has "taken me out" with his Escalade.

Anyway, thank you so much!