"So where do we stand in mid-July 2010? While the U.S. and OECD economies may not be doing so well, the global demand for oil has recovered nicely. After taking a two-year, 3 percent dip in obeisance to the economic downturn, global oil consumption is now reported to be back in the vicinity of its 2008 high of 86.6 million barrels a day (b/d) for 2010. While U.S. demand is down a million barrels a day or so, demand from China and India are up more than enough to offset what is called "weak" US and European consumption. The International Energy Agency (IEA) tells us that it currently expects world demand to increase by 1.3 million b/d next year to a new annual high of 87.8 million b/d.

As nobody who carefully watches global oil production expects it to increase in coming years, we are left with "total productive capacity" which is currently estimated by the IEA to be 89.7 million b/d. This is about 3 million b/d above what we are currently using -- maybe. Most of this spare capacity is supposed to be in Saudi Arabia; a land of eternal optimism where oil reserves never go down no matter how much is pumped up and sold. Many are skeptical that all of this "spare capacity" is really ready-to-go, reasonable quality, sustainable production capacity. If not we are in worse shape than we believe."
— Tom Whipple, “The peak oil crisis: A mid-year review,” Falls Church (VA) News-Press, July 14, 2010 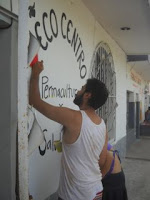 We are in rural Quintana Roo, Mexico teaching a 3-week course in natural building and appropriate technology and it is noticeably hot. The temperature in the daytime can climb to around 100°F with high humidity (we are out on the Yucatan Peninsula and it is densely forested) and can hold above 80°F well into the night. The course providers, while wanting to learn about how to make cob, strawbale and earthbag buildings using local materials, also want to take good care of we students and instructors, and so rented all the available houses in this small town that were pretty new and had electricity and indoor plumbing. That was a bit ironic, considering the course subject.

Many people in this small town still live in the old Mayan ways and build one-room homes from sticks and palm thatch, with hard-packed clay floors, an open cooking fire, and hammocks. After Hurricane Wilma the government came around and gave away free cinderblock and metal roofing, sand, and bagged cement and urged everyone to replace their damaged homes with something more modern and storm-resistant. The government built free cement cube houses, put in cement floors and ceilings, and the people bought electric stoves and refrigerators, ceiling fans and sometimes even an air conditioner.

After a while those grey cubes would develop a sheen of black mold — concrete beads moisture in this climate — but the people would just paint over the mold. The people also got TVs and stayed home at night rather than going out walking around the neighborhood like they used to.
On one wall of the cuarto where we are housed there is a black mold that looks like the Madonna with the Christ child. You can see the landlord has painted it over, but the icon is determined and is once more emerging. When we come back from a day of stomping cob and making arched windows of earthbags, we unlock the door and have to stand back to let the blast of hot, cement-smelling air escape. It is well over 3-digits °F inside because the building just sits in the sun and bakes all day and the one window is not placed in such a way as to catch a breeze. The walls retain dank heat for many hours after dark. Our pattern has been to immediately turn on the ceiling fan and then sit outside until the room cools down and the air gets better. We try to imagine what it must be like for all the people in this town who now live in these high-energy buildings and we can see that in just 5 years many things have changed for them.

Once in a distant motel out of boredom we watched a TV program popular with USAnians called Extreme Makeover — Home Edition. In this show they find some poor, struggling family who have been beset by some misfortune and a team of celebrities comes in, tears down their old toxic house (using a wrecking crane and packing it off to the landfill in large containers) and builds them a new toxic house, much larger, with a huge energy footprint. We could not help but wonder, watching that, how that poor, struggling family would pay the new energy bills and whether anyone had investigated to see how many of those families sold their new houses and moved to something they could afford, or were just shamed by their neighbors into sticking it out and had to work extra hard to pay all the bills. The show gives new meaning to “house slaves.” 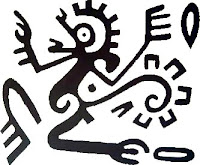 One irony of the Mexican rural aid program is that there is not enough State-subsidized electricity to support the building upgrades, so brown-outs and black-outs are more frequent now, and will become even more so as PEMEX, the national oil company that fuels the electric plants, nears its stated crude oil exhaustion date of 2012-2014.

We directly experienced what this will mean when we returned one night to find the power off, meaning that we could not cool down the house. In some ways it was a blessing because we did not have to listen to the neighbors’ televisions, but without the ceiling fan, sleeping was very difficult. We did what we often do in Tennessee when it is very hot (and where we have been off air conditioning since 1994) — we took a cold shower. In fact, several, every couple of hours through the night, to keep our body temperature at safe levels and get enough rest for the following day.

This could well be the future, when many places much farther from the Equator will experience similar conditions — hot days, hot nights, no power, maybe scarce water, and the consequences of earlier decisions for design of the built environment. While we lie back and try to sleep, we imagine that we are just in a boot camp here. This is basic training.

Saudi Arabia’s King Abdullah told Saudi scholars studying in Washington that he had ordered all Saudi oil exploration to cease "in order to keep the earth's wealth for our sons and grandsons.”