We are back in the Mayan Mountain watershed in Southern Belize in what the locals call “the forgotten district.” It is so ignored by the goverment in Belize City that a few years ago a local politician was successfully re-elected after going to the UN and asking if his district could be taken away from Belize and given to Guatemala. In political terms, that would be like the governor of Texas appealing to the UN to give his state back to Mexico. The campaign button could be “Forget the Alamo.” 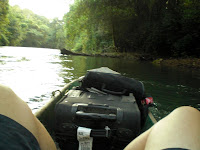 We are a dory-pole up river at the Maya Mountain Reseach Center teaching a permaculture design course. Half the class is a collection of nationals from other countries and the remainder are Belizians, mostly local Mopan Mayan villagers. Hector Reyes did an interesting session today on “Designing for Catastrophe,” and a part of that bears repeating here.
The U.S. Geological Survey puts last month’s Haitian quake at  7 on the Richter scale. The scale is logrithmic, meaning that each whole number represents ten times the size of the next lower number on the scale. Chile’s disaster was 8.8, 501 times larger than Haiti’s.
The difference in casualties was very different, however. Haiti's government estimates some 220,000 people died. Chile's death toll is put in the hundreds.
Here is the diagram we drew on the chalkboard: 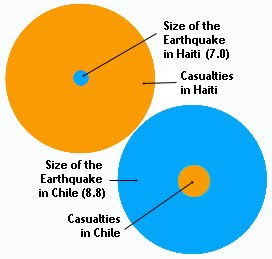 Many recent natural disasters reflect an essential component of our modern world, namely our addiction to growth. With global population in fecundity overdrive, even normal cycles of earth movement are producing casualties in exponential excess.

In the permaculture class we called this a design failure. Many Haitians grabbed cement pillars only to watch them crumble in their hands. Chileans, whose earthquakes have been the basis for architectural design since the mid-19th century, have cities and villages built to ride out quakes by rolling and flexing (which, granted, provides no protection from middle-of-the-night tsunamis). Haitians, like those in population centers on the New Madrid fault running through the US heartland, have no similar preparations.
Design for catastrophe is something oddly missing from the Obama domestic program, as it is from the domestic policies of most nations. Few yet acknowledge peak oil, climate chaos, or the collapse of our globalized consumer civilization as threats, and so only the most cursory of preparations are being made.
So, most of us are Haitians, waiting for the next Big One, rather than Chileans, making plans to weather the inevitable shake-up that we can be certain is coming.
Posted by Albert Bates at 10:10 AM

Re: "something oddly missing from the Obama domestic program"

It is odd, given that Homeland Security is such a priority, that so little attention is given to the "security" and protection of the land itself.