— Donald Rumsfeld, Press Conference on the situation in Afghanistan, February, 2002

There are also the unknown knowns, or rather those things known to some but not to others, including those who most may need to know. The possibility cannot be excluded that such unknown knowns apply to the Mexican flu.

We picked up a copy of the weekend edition of the Wall Street Journal while passing through the desolate, echoing canyons of Nashville’s international departure lounge at mid-day on Saturday and felt a sudden urge to scream. A two-hour flight and the in-flight wifi system on Delta/Northwest offered a better alternative.

What prodded us to write, at 30,000 feet over Mississippi, en route to Mexico, were the fascinating connections between the four seemingly different stories on the Weekend Journal’s page A2. We started drawing arrows on the page with our pen. Top left was a story under the headline, “Memos’ release upended strategy on past” in which Evan Perez and Jonathan Weisman wander behind the scenes at the White House to parse the intentions of the Obama administration concerning prosecution of war crimes by their predecessors.

The Perez/Weisman story would have it that Obama is adamant in squelching Congressional truth commissions and Justice Dept. special prosecutors while providing full and infuriating disclosure through slow time-release of historical documents and photos. The nuance unreported is that by taking that stance, the White House deflects right wing political heat, including that of Blue Dog Democrats, while stoking the fires of litigation and international prosecutions that will ultimately provide justice for the perpetrators. The President also gets to watch his political opponents slowly twist in the wind, hoisted by their own “maintain the cover-up for the sake of the country” petard. In a nation addicted to breaking-scandal news cycles, that Blue Dog just won’t hunt.

Top right was a story under the headline “U.S. releasing Iraq, Afghan prison photos” although the actual release is still a month away. The release of part of the Pentagon’s trove of abuse photos was ordered by a federal court as part of a case brought by civil libertarians in 2003, pre-Abu Gharib. The decision to let them go public now is part of that fire-stoking thang.

Of course, what we, the scandal addicted, would really like to see is the secret photos that circulated betwixt congressional oversight committees in 2006, showing sexually-explicit abuses of women Abu-Gharib prisoners. Those may never see the light of day, any more than the abuse of children pictures or the CIA’s torture videos. Perhaps they can be viewed through plexiglass frames in a George W. Bush museum in Crawford, Texas, some day, something akin to the Dracula museum in Transylvania.

Lower left A2 was the headline, “Scientists fear people can spread new virus,” over a story reporting the World Health Organization’s concern that A/H1N1 flu represents “a cross of swine, avian and human viruses in a way that hasn’t been seen before” and a warning that it could augur a global pandemic similar to 1918, if not stopped.

Lower right was the continuation of front-page-above-the-fold: “Mexico races to stop deadly flu outbreak.” At press time, the Mexico City outbreak of H1N1 had infected 854 people, of whom 59 died within the preceding 48 hours. H1N1 was already showing up in central Mexican states, Texas and California, and the CDC’s acting director was saying containment was no longer an option. These numbers and locations have since increased, and rumors emanating from workers in Mexico’s hospitals say as many as 1000 fatalities occurred in a single hospital. People are fleeing the city, which has now closed schools, public buildings and places of entertainment. The official number in Mexico at this writing is about about 2000 cases and about 150 people have died.

What ties these four stories together? Donald Rumsfeld.

Rummy was the Stan Laurel to Dick Cheney’s Oliver Hardy in the Ford, Reagan and Bush Administrations, and not only knows where the skeletons are buried, probably did much of the spadework.

Like Forrest Gump, Rummy is an apex of historical confluence, whether bringing a pair of golden cowboy spurs to Saddam Hussein, selling nuclear reactors to North Korea, or reassuring us that weapons of mass destruction will be found in Iraq eventually. Whether Rumsfeld had a role in slipping superthermite girder paint past Marvin Bush at the World Trade Center, secreting nano-tefloned GMO anthrax from a national weapons lab and mopping up witnesses, or downing a light plane that carried Paul Wellstone and his staff, we may never know. Those are known unknowns.

A possible unknown known would be why the H1N1 outbreak came in Mexico City, which, coincidentally (?) was the location where an exposé, in Spanish, of the Rumsfeld Pentagon's secret program to create a bioengineered flu pandemic was published a month before the first case appeared. 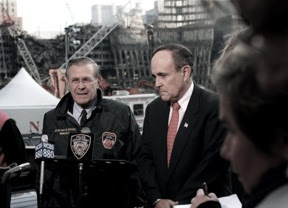 Rumsfeld and Giulian at Ground Zero 9-11

As a former chairman and major stockholder of Gilead Sciences, Rummy stands to gain financially from sales of Tamiflu, which, by sheer coincidence, is one of only two anti-viral drugs that H1N1 appears to not tolerate, very odd for a pill genetically designed for avian flu, not swine flu. One might not unreasonably inquire whether the Former Defense Secretary might be building a war chest for his coming legal fees, once the Senate Select Committee on Intelligence starts releasing its findings to The Hague. Perhaps Rumsfeld hopes to stay out of prison long enough to enjoy his huge new fortune, but Tick Tock, old man.

Oh, and Carl Levin, Diane Feinstein and Arlen Specter? Those guys should really get some flu shots.

An earlier version of this essay originally appeared in Culture Change.

It is indeed the era of ethics, or "the lifting of the veil" on them anyway. As with "make a law, make a business" they now can "make a disease, make a profit." That is not new, the reason we can't get a good health-care system is because making people sick is a very big and profitable business.

Since there will be only enough vaccine for 10% of the population next fall, at best, you can guess who will get it first with rationing (political leaders)

Another interesting thing was that the Tamiflu drug only lasts 5 years. The Australian government has vowed to buy 1.9 million new doses - this also will not cover the whole population so yes it will be interesting to see who gets it. A five-year expiry will also ensure a nice constant request for renewals.

Another interesting thing is that the Tamiflu drug apparently only lasts 5 years. The Australian government has vowed to buy 1.9 million new doses - this also will not cover the whole population so it will be interesting to see who gets it. A five-year expiry will also ensure a nice constant request for renewals.