Spring is definitely here now, lots of neotropical migratory birdsong at the dawn 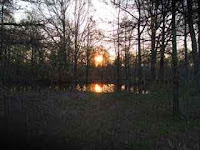 chorus, and I need to wear less on my morning bike rides. Those rides are taking me through the surrounding countryside, watching new houses still going up – impractical 3.7 inch stick frames with plywood and asphalt shingle roofs, and cheap doors and windows, that are much too big for one family and going to be quite expensive to heat and cool.

I guess it is a good thing that the banks around here are still lending. The one in Summertown even has a vinyl banner saying they have great rates for new mortgages. I just don't think it is a good time to be borrowing.

Gas stations are pushing at the limits of their abilities to display diesel prices on the old analog pumps – the kind with rolling tumblers. The older ones don’t count to $3 and $4.

My morning rides are a time to clear my head and stimulate my heart, set up my metabolism for the day and work off a few pounds. Despite getting back from an airport pickup last night at midnight, I was up at 6 and pounding the pedals, because that is when the traffic is least and the dogs still indoors or chained up for the night. 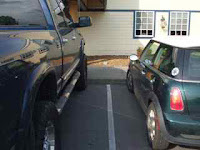 On the trip up to Nashville, I parked outside a Quick Mart and a pickup truck parked next to me. I was struck by the juxtaposition of a two-passenger vehicle whose front wheels were taller than the bonnet of my Mini. I am definitely outweighed in a dust-up, and have to rely on staying nimble. 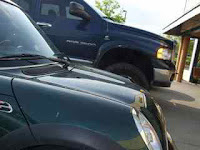 Two new apprentices arrived from Southern Mexico, complaining of airport security hassles that stretched what should have been a 2 hour direct flight into something more than twice that long. They reported that in Mexico the violence is growing quickly now, with the drug gangs fighting the police out in the open, assassinating successive Chiefs of Police in Cancun, and otherwise terrorizing the population. It is beginning to sound like Medellin.

I also learned from them that Spain is suffering a severe water crisis. A few years ago I rode the train from Eiche, Spain to Ventimiglia, Italy and we had to to halt several times and wait for the smoke of wildfires to clear before the train could continue. The Moroccan Desert is crossing the Straits of Gibraltar and spreading up into the Iberian Peninsula. The picturesque fountains in Catalan have run dry. Reservoirs are just 20 percent full after four years of drought, and one is so dry that a village has reappeared after being under water since the river flowing through it was dammed. It is a sweet revenge for the ghosts in that village, some of whom are undoubtedly Moors. 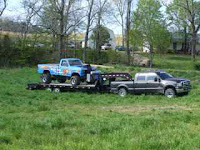 Spain has plans to import water to Barcelona by sea beginning in May and by rail in August. A new pipeline from the Ebro river will be completed in October, but that has angered the regional governments further down the Mediterranean coast in Valencia and Murcia, which rely on the Ebro, a river growing shallower by the day. The delta around Valencia and Murcia is known for growing rice, something the world is seeing significantly less of these days.

I am still trying to get my head around this image of huge tankers docking in Barcelona, offloading water from France.

This year the UN Committee on Sustainable Development’s annual meeting in New York (CSD-16) is a review session of the third implementation cycle. By now, if everything had been going according to plan, “Sustainable Development” would be banging along on all cylinders. Instead, it seems to be limping along, wondering why it cannot reach goals on hunger, water, energy and climate. CSD-16 will focus on the themes Agriculture, Rural development, Land, Drought, Desertification, and Africa. Not much happy to report there. Still, one highlight will be the “City and Farm Linkages” tours that will take delegates to community gardens, city farms, youth and farmers markets, the Union Square Greenmarket with farmers from 200 small farms, and healthy food access programs in the poorest neighborhoods of the City. On May 10 the tours go up to the Hudson Valley to visit 3 farms and a winery in Pine Hill NY. On Sunday May 11 there is at a full day of symposia and workshops at Columbia University addressing Climate change, food security, the role of cities, agrofuels, and soil, water and nutrient conservation. I am tempted to go, except that I know all that and might be more useful here, just doing it. 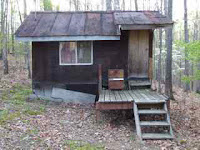 The tours are free of charge but space is limited so be sure to pre-register if you want to go.

The weekend after that we are hosting our annual herbal workshop with Del Combest. This is a really valuable program, teaching you how to identify, cultivate, harvest, cure, and prepare herbs. Considering how fragile the pharmaceutical pipeline is, it is a wonder to me that more people don’t sign up for this workshop. With only 3 weeks to go, we have zero registrants so far. Del has said he will come down from Virginia where he teaches pharmacology and give the practicum in any event (we have staff and apprentices who are very interested). Do you know how you are going to get medicine for arthritis, pain management, colds and fevers, asthma, blood pressure, or chronic illnesses 10 years from now, when you will probably need them more? If not, think about coming to this.

We’ll be reporting on Del’s workshop and other happenings here at the ETC in our new blog called Terra Firma. Check it out as our Training Center staff takes turns introducing themselves and what they do. 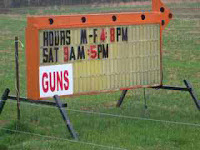 We are getting ready this week for our workshop on biofuel conversion, which treads a narrow line between exacerbating the world food and water crises and getting to the post office (in rural areas like ours Congress stopped the money for home delivery back during the Reagan administration). Our compromise is to use french fry fat until we can grow enough algae or cattails on our waste treatment lagoons to brew our own. If you want to learn how we do it, come on down.

And bring a bicycle.
Posted by Albert Bates at 11:52 AM