“What now remains compared with what then existed is like the skeleton of a sick man, all fat and soft earth having wasted away, and only the bare framework of the land being left.”
— Plato, Critias

I am a dugout canoe trip up river in the Maya Mountains of Southern Belize not far from the Guatemalan border. Miraculously, we have a Hughes Net satellite dish in the camp here, powered by a Southwest Windpower Air-X and some BP polyamorphous solar panels. It is a great place to sit and watch the decline and fall of the Petroleum Empire.

Over the weekend, Bear Stearns was bought out by JP Morgan Chase for about one-quarter of the real estate value of their mid-Manhattan office tower. It was a spectacular fall – from $145 per share on Thursday to $30 on Friday to $2 per share on Sunday. One can only lament the fate of New York state and local government pensioners, including schoolteachers, firefighters and welfare caseworkers, who have $68 million of their retirement nest egg in Bear Stearns stock. If the Bear gives Morgan Chase indigestion, retirement for NY state workers could be less than rosy.

The financial news is all abuzz with the prospect that the Bear will not be the last casualty. Thanks to Matt Savinar at LATOC for these links:
Asia Times: What You See is What the Worse Case Scenario Looks Like;
Business Week: A Red Flag for Bank Liquidity;
CNN: The Magnitude of This Meltdown is Unprecedented;
CNN: Can the Fed Stop the Dominoes from Falling?;
Fortune Magazine: This is the End of Wall Street as We Know It;
London Independent: Financial Markets Have Seized Up;
London Times: City Shaken as Events on Wall Street Unravel;
MSN Money: Wall Street Turmoil Quickly Spreading to Main Street;
NY Times: The Unthinkable Is About to Become Inevitable;
San Francisco Chronicle: Economic crisis worsens. Is anyone in charge?;
Guardian: We're Surprised Americans Aren't Rioting in the Streets by Now;
Wall Street Journal: Crisis Sends a Stake Through the Heart of Wall Street;
Washington Post: There Has Never Been a Crisis This Comprehensive.

Sandy Chen, of UK analysts Panmure Gordon, said: "This is not a liquidity crisis, it's an insolvency crisis." Asia Times: Losses to Come Will Probably Wipe Out the Banking System

It won’t do you any good to try to change dollars to euros in those street kiosks in Amsterdam. They have stopped accepting dollars.

To date, the US and EU central banks have put up $2.5 trillion worth to bail out banks and bond markets. They are doing this to prevent a total banking collapse. If you read all of the above and have become concerned, you might think to go to the bank and take out your money, might you not? As of December, the FDIC was covering $4.3 trillion in insured deposits in the United States with a fund of $52.4 billion. If more than 1.22% of depositors ran to their bank, the FDIC would have to declare insolvency. L.A. Times: Several Major Financial Institutions Are Going to Fail. 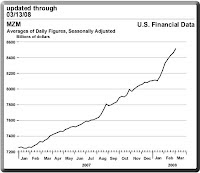 Assuming you get your money back from the bank, what will be the value of holding dollars? Here is a chart of the U.S. money supply during the past 15 months, courtesy of Catherine Austin Fitts:

This week gold traded at $1,031 while silver rose above $21. That tells us that people are dumping currency, stocks and bonds for something more tangible. Oil went north of $112/barrel, and the cornucopians say that has to do with dollar concerns. Goldman Sachs Says Oil Could Reach $175 a Barrel Soon.

But can gold and other commodities' high prices hold? A reader of The Daily Reckoning suggests gold may take a detour back to $400 or lower simply because in the deflation to come, which will be brought on by an escalation of the current liquidity crisis, gold will be sold off to pay for margin calls. Then, if gold is re-valued later as the standard against which all currencies will be measured, it might fall under international price controls, so that suggests some not inconsiderable risk in the flight to gold. Other metals, and the commodities you eat, are less susceptible, because they are getting scarcer by the day, even as world population continues to rise. There may be a bit of a hard asset glut in the short term, however.

On March 15th, the Wall Street Journal explained that, after years of relying upon foreign debt to finance the U.S. economy, "The U.S. is at the receiving end of a massive margin call: Across the economy, wary lenders are demanding borrowers put up more collateral or sell assets to reduce debt."

The U.S. Treasury is not at the bottom of its financial barrel, but if you push a stick down there, you can hear it scaping. Of the $709 billion in Treasury bills — borrowed money — 60% has now been applied to bailing out Wall Street. The Fed is committed to new T-bill auctions to raise $430 billion. Lowering the rates will not help sell these bonds, because the latest 0.75 percent drop puts return on investment already well below inflation, and with the need to print more dollars to bail out more banks, and possibly even buy the sour collateral held by Fannie Mae and Freddie Mac, inflation must needs rise farther. It is like sitting by the river and watching your retirement cash float by, dollar after dollar. Can the Euro move quickly enough to become the world's reserve currency and keep the currencies of the rest of the world from going over the falls after the dollar? Stay tuned.

Looking around here in Belize, while this relatively impoverished country is not immune to the wave of failures in world financial markets (the US dollar is a second currency here and the Belizian dollar is pegged to it), they at least grow a lot of food. They will not starve when there is no longer enough gasoline to take them to the grocery store.
Posted by Albert Bates at 9:17 PM

I hope you'll come back and visit us in the post-industrialized 3rd World.

The developer building all the houses in the fields where I walk my dog doesn't seem to have gotten the memo. They're still digging away with backhoes back there and putting in the infrastructure for more suburbia.