Burning Down the Wall

"Put a CARBONATOR-500 in a village in Honduras and you reverse the migrant caravans."

Recently Kathleen Draper, my co-author of Burn: Using Fire to Cool the Earth, due out from Chelsea Green February 7, and I calculated how many CARBONATOR-500 biochar kilns we could buy for $5.7 billion. We reckoned it was around 11,400, at retail book.

The CARBONATOR-500 comes on like a Panzer VIII Maus (“Mouse”) super-heavy tank. It replaces the ROI (Ragnar Original Innovation) company’s prior dreadnaught, the ENVIROSAVER-350 (diagrammed below), which weighed in at 34.5 tons. The CARBONATOR-500 is 41.5 tons and driven by a Caterpillar engine roughly the size of the Daimler-Benz DB 603 inverted V12 that Ferdinand Porsche used to power the 207-ton Maus. 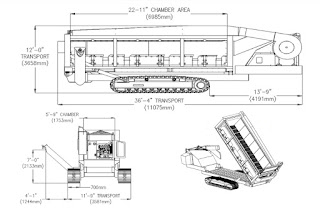 Getting under the hood, the more important displacement is how much carbon is coming from the atmosphere every hour, thanks to the contributions of trees. Lumbering up and down stumpy hills and almost effortlessly moving through mudslides and over pick-up-sticks debris fields after wildfires, it forages for deadwood — the kindling of future fires — to stuff its pyrolytic maw. It digests at more than 1000 degrees C and craves more. As its biochar output is continuously quenched with water injection nozzles and sieved, three horizontal augers discharge from its bum into receiving trucks for transport to a microbialization station or merely disperse the rejuvenating elixer to the burnt soils to be invested with the forests’ own indigenous microorganisms. The two rear combustion chamber access doors and quick interchangeable grates permit easy clean out of non-combustibles and oversize char.

Each of these behemoths is a Mobile Cool Lab. If, using daily averages and allowing down time for maintenance, each produced 10 tons of fresh biochar per day — in a year a single CARBONATOR would have sequestered more than 10,000 tons of CO2 (conservatively assuming the biochar is 80% carbon and calculating that CO2 is 3.67 times the weight of C). For the price of Mr. Trump’s wall, 10,000 of these machines could remove 100 megatons of CO2 from the atmosphere each and every year.

Let me be clear. The way this works is that the kind of carbon trees are removing is called labile carbon, the type used by photosynthesis to grow plants and feed or shelter us. Pyrolysis transforms labile carbon to a different molecular form — recalcitrant carbon. Its bonds are too strong to be easily broken by microbes or light, so by being made into biochar it exits the photosynthetic carbon cycle and becomes structure for soils and other useful things. Today we call this biochar, but 1000 years ago it was better known as the active ingredient of dark earth (terra preta). Every ounce of carbon that gets transformed from plant to mineral form gets off the carbon wheel of birth and death for a thousand years or more (much more in the case of 250 million-year-old biochar left by paleolithic wildfires) and becomes needed structure to regulate air, water, and biology in the soil. By making 10 tons of biochar, a pyrolysis kiln is keeping that much from re-entering the atmosphere (and oceans, because the two are in rough equilibrium). We need to restrain some 650 gigatons of carbon to get back to the comfortable Holocene. One hundred megatons per year would start us down that road.
Of course, the C-5 is a big beast, and need not be confined to forests. It is equally comfortable sauntering out to rice and wheat fields (on roads so as not to compact soils with its weight) or standing by large grain processing mills to consume the chaff and crop residues it finds there. It is content to lie in the tall grass next to a sawmill or furniture factory chomping sawdust and mill ends all day. Put it by a papermill or landfill and it is in heaven. 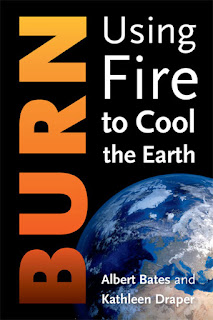 In order to rescue ourselves from climate catastrophe, we need to radically alter how humans live on Earth. We have to go from spending carbon to banking it. We have to put back the trees, wetlands, and corals. We have to regrow the soil and turn back the desert. We have to save whales, wombats, and wolves. We have to reverse the flow of greenhouse gases and send them in exactly the opposite direction: down, not up. We have to flip the carbon cycle and run it backward. For such a revolutionary transformation we’ll need civilization 2.0. BURN releases February 7.

But here is the real magic. It reverses migrant caravans. Put a CARBONATOR-500 in a village in Honduras and now you have a Cool Lab. Let us imagine some of the quickest, cheapest add-ons:
Here is a mind map for such a biorefinery using only a single crop — bamboo. Then imagine it for 100 other indigenous plants and scores of problematic waste streams. 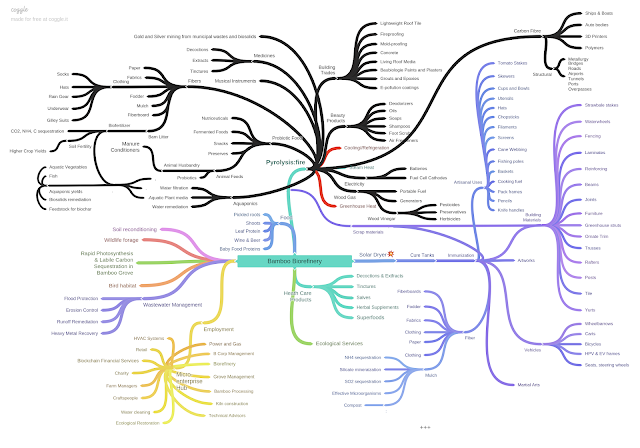 How many refugees might one Cool Lab employ? 100? 1000? 10000? Now, tell me again, how many refugees were in that Honduras caravan that POTUS is poised to declare a national emergency over? 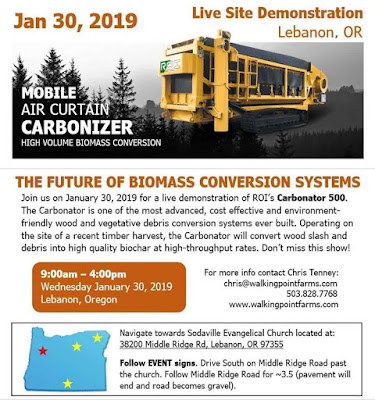 I'm all for biochar, but moving the pyrolizer to the wood should be far less efficient than moving the wood to a stationary biochar production facility. And how would the by-products of the facility, like electricity, be distributed from a moving production facility? And where is the quench water going to be found as it lumbers around in the woods?

Since the trucks that will be shipping the biochar to other locations will be driving on roads, even if it was important to move the production facility frequently, why put it on tracks rather than wheels (and keep it on roads)?

Years ago, I used to own a Mobile Dimension portable sawmill, which like most other owners of that kind of equipment, I promptly installed in a permanent, fixed location and brought the logs to the mill rather than take the mill to the logs. I think that most industrial biomass production and conversion equipment will be used the same way, including biochar facilities.

I haven't dropped in here in a while, but I am currently running a Survey on Collapse Attitudes for 2019. Please drop in on the Diner and contribute your Opinions on how Collapse will play out from here...

2019 Collapse Survey Politics & Economics Overview now UP on the Doomstead Diner! Total of 636 Respondents from all websites. Survey is still OPEN if you haven’t registered your opinions yet on the Collapse of Industrial Civilization!

I am often to blogging and i really appreciate your content. The article has really peaks my interest. I am going to bookmark your site and keep checking for new information. kingsmedicalcenter.ae/