You Can't Stop A Wave But You Can Surf-3

"The struggle with any addict is to produce permanent change."

Just when things seem most dire, and there is no possible escape, we catch another faint flicker of hope. In my two previous installments I laid out the predicament. By now anyone who has followed this blog for a while (and a tip of the hat to our loyal supporters) knows this mantra by heart:

There is a finite supply of fossil fuels, and even if we could discover more and refine them at a reasonable price, we can’t burn them because the atmosphere is so polluted that climate change will kill us.

The energy embodied in traditional fuels — sunlight, wind, tides, currents, plants, animals and humans — is several orders of magnitude more diffuse and difficult to harness than light sweet crude or bituminous coal. The energy density of fossil fuels has made possible the high-level civilization that allows me to type this into your phone.

Nuclear power, apart from the facts that it poisons future generations(ughhh!), or is a gateway drug to WMD (yark!), is also running out of fuel. Nukes all over the world would be shutting down already had not the FSU honored the Megatons to Megawatts Program (killed by Obama) and hammered warheads into zirconium-clad U-235 plowshares to sell on the nukefuels market. There are a few more years of that stuff still out there, especially if the US and Israel join in, but after that, lights out for our friendly atom.

The climate change long predicted (for at least 150 years by our reckoning) is now upon us with delayed vengeance, as are Malthus’ ill tidings. Overcharged fecundity is paired to outsized footprint inversely to what is required, which is no-one’s fault, just bad design. We are an Edsel that sees a Mustang in the mirror. We need eyewash more than anything else.

There are cures for myopic addictions, but the struggle with any addict is to produce permanent change. As we’ve chanted, if we expect to get out of this without going extinct there is only one biophysically verifiable path. We have to go over the Seneca Cliff of industrial collapse and follow an 11 to 20 percent decline grade in carbon emissions for the next 80 or more years, not just to zero, but well beyond. We have to raft through the cascades into Negative Emissions territory — the land called Drawdown — by 2030 if we can, but mid-century at the latest. Getting there somewhat later is not an option. The party will be over. We would be the final progeny of a 100,000-generation run for one magnificent mammal. Then we’ll be no different than the Dodo.

Recently Alex Smith at Radio Ecoshock rebroadcast one of my favorite Australian podcasts, Beyond Zero, and its interview with Oxford researcher Tina Fawcett, author of the book Suicidal Planet, concerning her concept of personal carbon rations.

Let me start by saying that I don’t like the framing of the word “rations.” It might sell well in a culture of stiff upper lips or shared social burdens, but would never get anyone elected in the USA. If you doubt that, go to Plains, Georgia and ask Jimmy Carter.

Fawcett agrees. She has switched to using “carbon allowances.” I still think that is too weak to get broad social buy-in. “Dividend,” after the style of the Alaska Permanent Fund, would be better, had it not already been devalued by deniers and put in the same dung bucket as carbon tax or cap and trade. My personal favorite would be “award” but perhaps readers have suggestions.

“Its not really a parallel currency but it’s a little like that, in that you have to think about both the money and whether you’ve got any carbon allowances left to spend that year. And if not, are you prepared to pay the price to get more?”

I can see some issues with this. For one thing, even if the award distribution is equal for every person in the world, your average Goldman Sachs bankster is not going to care what balance is in her account, because she knows she can just go to the open market and buy more credit before she fills up the tanks on her yacht. There might even be a megaton credit in her Christmas bonus. Meanwhile, granny eating catfood and cutting her prescriptions in half can’t just borrow her grandson’s iPhone and order more from Amazon because she might live in a rural area and just the energy expense of Amazon’s drone delivery, not to mention their server banks, would eat up half her purchase.

Still, what is appealing to me about this ration coupon — sorry! “award” — system is something not discussed by either Smith or Fawcett. They mention, by implication, the Bangladeshi rice farmer who can sell his ration and buy fertilizer. They neglect the savvy BitCoin miners — potentially millions of them between 18 and 30 — who might trade in their Antminers for Kon Tikis and go for the easier gold — putting carbon underground.

Now, that would be a real wave. 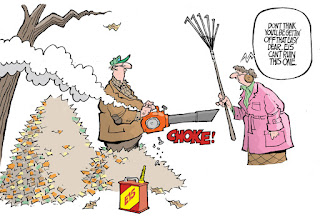 The "award/credits" system changes nothing. Right now how much money you have is directly related to your carbon footprint. Fawcett's scheme does not change that, it only puts money into other peoples hands so they can increase their carbon footprint too.

What might work is to tax all carbon use at a 95% rate and use the money to pay people to absolutely not consume. I am not at all sure how this would work and it would most likely just make inequality even worse where only the .1% get to live like kings while everyone else walks around looking for food.