Sargon and the Sea Peoples

"For hundreds of years, stories of marauding Sea Peoples were told to frighten children." 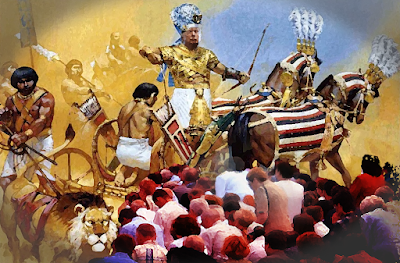 Back in 2250 BCE, Sargon of Akkad found the grain farming good in the broad, flat alluvial valley between the Tigris and Euphrates Rivers. Being an accomplished bully and not fond of toiling in the heat of the sun himself, he assembled a gang of thugs and enslaved weaker people to work for him. They built vast irrigation systems, knocked down forests and opened up much of the fertile Mesopotamian Plain to oxen and wooden plows. With good soil, good seed and adequate rain, his tribe prospered and applied their surplus to erect a number of market cities that were considered quite grand for the period.

You can’t just knock down forests and dig long irrigation ditches and expect Nature to let you off scot-free, however. The plowing opened the soil to the sun and killed the rich microbial life built by those erstwhile forests. Irrigation made the fields salted and addicted. Major lakes silted. Without the trees and their fungal network, the weather changed. It stopped raining.

After a mere 130 years of prosperity, the Akkadian empire collapsed abruptly in the 22d Century BCE. There was general abandonment of agriculture, dramatic influxes of refugees, and widespread famine. The same calamity befell much of the rest of the region. Poorer tribes flocked to wealthy Akkad seeking help.

Faced with the rising tide of hungry people, Sargon’s successor thought a good solution would be a 112-mile-long wall, roughly the distance by patrol car between Brownsville TX and Rio Grande City, which Akkadians dubbed the “Repeller of the Amorites.” They may even have claimed they were going to get the Amorites to build it, but those clay tablets haven’t been located yet.

Fast forward a few decades and we find Akkadian cities in ruins, the plains desertifying, and smaller sedentary populations farther north around the shores of Lake Van trying to eke out a frugal living eating grasshoppers and frogs. It was a rough come-down from former glory.

Of course, the Akkadians were not entirely to blame. Their changing climate was also influenced by 1 to 2 degree cooler sea surface temperatures in the North Atlantic that changed rainfall in the higher elevations. In their haste to develop, they had not left themselves any safety margin.

A few thousand years later another serious drought struck that part of the world — much of it within what is now Syria and Palestine — and by this time the population was much larger than back in Sargon’s day. The first wave of these “Sea Peoples” washed over Egypt in the second year of Ramesses II, 1276 BCE, but rather than build tent cities to house them, the Pharaoh simply trapped and slaughtered some 6000 people arriving in boats with all their goods, and then sent his chariots to drive stragglers back into the sea. A bit of a blowhard, Ramesses claimed a great victory and had the story inscribed in stone and read on ceremonial days.

The Syrian drought continued, however, and Ramesses son, Merenptah, writes how, in the fifth year of his reign (1209 BCE), Libyans allied with the Sea Peoples to invade Egypt and were repulsed with 6000 casualties. Six thousand seems to be a popular number when you are killing Sea Peoples.


Then Merenptah’s son, Ramesses III, in c. 1200 BCE was informed they were coming again. The populations fleeing drought-stricken Syria had already destroyed the Hittite state and Ramesses III wrote, “they were coming forward toward Egypt.” Ramesses also makes the first recorded mention of the Israelites as one of those groups trying to illegally migrate into Egypt.

“If they would just report to processing centers they could apply for asylum,” Ramesses III might have said. But secretly he set ambushes all along the border and made especially effective use of his archers, positioning them along the shoreline to rain down arrows on approaching ships. Once the ships’ passengers were dead or drowning the vessels were set on fire with flaming arrows so that not even children could escape. Then Ramesses III turned his archers toward any survivors who made it to land. Egyptian records again detail a glorious victory in which many of the Sea Peoples were slain and others taken captive or pressed into the Egyptian army and navy or sold as slaves. For hundreds of years, stories of marauding Sea Peoples were told to frighten children.

Ramesses’s border defenses were so expensive they drained the Royal Treasury. This led to the first labor strike in recorded history. The unpaid workers and government contractors shut down the government, demanding to be paid.

Century-long droughts can be found at many points in the historical record. California experienced a 240-year-long drought that started in 850 CE and, 50 years after the conclusion of that one, another that stretched at least 180 years. Mexico experienced an abrupt climate shift between 800 to 1000 CE that brought dry conditions to the central Yucatan for 200 years, curtailing the era of monumental Mayan architecture. Lowland population densities plunged from 200 persons/km2 at the peak of the Late Classic period to less than half that by 900 CE. City complexes of more than 50,000 people, like Tikal, were abandoned to the rats and weeds.

Challenged by unprecedented environmental stresses, cultures can shift to lower subsistence levels by reducing social complexity, abandoning urban centers, and reorganizing systems of supply and production, as the Maya, Akkadians, Romans, Tiwanaku, Mochica, Athenians and many others have done, but more often — and even in those cases — they failed to recognize what was happening until it was too late to escape unscathed. They waved their arms, followed militant leaders, found convenient scapegoats, increased debt, took to the streets in protest, overtaxed their most vital resources, and kept trying to grow their way out as if growth was the only solution they could imagine.

It never works. Sometimes civilizations go the way of the Easter Islanders. Other times they are conquered and destroyed by an even more desperate and militant neighbor they foolishly made into an enemy.

Samuel Clemens added greater depth to Santayana’s theory, fifty years earlier, when he said: “History doesn’t repeat itself, but it does rhyme.”

Last year, speaking at Wells College, I concluded by saying, “As a global culture, we can create social norms that would permit us to sustain healthy economies and ecologies into the turbulent climate future we cannot now avoid. There are neither technological nor resource barriers to prevent that outcome.” There are, however, biological limits, including the psychology of sunk investments.

Sad to say, even if the 45th President of the United States had not cheated and bullied his way through his education and actually studied history, it would not have made any difference. We are just in that part of the cycle now where stupidity trumps the obvious. The queues of refugees may not be quite the same as the Sea Peoples, but they rhyme.

Originally published at www.patreon.com. Thanks for reading! If you liked this story, please consider sharing it around. Our open banjo case for your spare change is at Patreon or Paypal.
Posted by Albert Bates at 7:00 AM

This and your previous piece are beautiful.

Thanks for this Albert. Coincidentally am reading/immensely enjoying Against the Grain by James C Scott- very much along these lines... It does seem that folks living outside of the empires might very well have lived freer/better/healthier.... The trick is to get there..and that's where I value what y'all are doing at the Global Ecovillage Network... Best, Dale

History may or may not rhyme or repeat itself but we can learn one heck of a lot from it. Why is it that all of the past is ignored? There are so many lessons we should have learned even in the recent past that haven't even been considered - and so here we are. Unfortunately there are no intelligent adults in the White House. Regards, Russ

This is a great article. But please note that the gap between the first two events mentioned are about a thousand years, not "a few" thousand.