"We have, through accident or design, structured the human ecology into a zero sum game, where a few in lucky positions can succeed by beggaring their many neighbors." 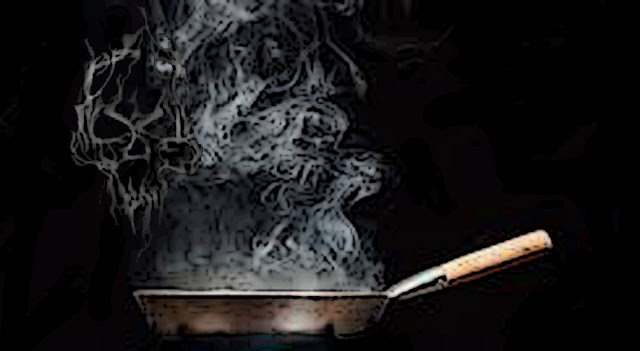 “Despite what is being reported, EPA has not finalized or publicly issued its PFAS management plan, and any information that speculates what is included in the plan is premature. The agency is committed to following the Safe Drinking Water Act process for evaluating new drinking water standards, which is just one of the many components of the draft plan that is currently undergoing interagency review.”

David Ross was an industry shill suing EPA and state agencies for 14 years before moving into state government in Wyoming and Wisconsin where his main achievements were to roll back state powers to protect water from fracking wells, claiming federal pre-emption, while at the same time suing EPA to prevent enforcement of clean water laws. So, naturally, he was recruited by President Trump and EPA director Scott Pruitt and put in charge of water protection for the whole country.

Since his arrival, EPA has been dithering on whether to protect drinking water from unregulated industrial chemicals known as per- and polyfluoroalkyl substances (PFAS). Meanwhile, government scientists have found that the compounds are more widespread in drinking water than thought.

PFAS chemicals are widely used to make nonstick and water-proof products, including foams used to fight fires. Two of the most common forms — perfluorooctanoic acid (PFOA) and perfluorooctane sulfonate (PFOS) — are no longer made in the United States, but in some cases have been replaced by related chemicals and there are plenty of the older pots, pans and spatulas still in circulation. Being plastic, once in the environment they don’t go away. While many communities have been pushing officials to test water supplies in order to document the extent of any contamination, EPA now has a fox watching over the henhouse.

In 2018, a study by career scientists at EPA and the United States Geological Survey described surveys of PFAS contamination in source and treated water from 25 drinking water treatment plants across the United States. When the concentrations in the treated drinking water are compared to the existing EPA water health “advisory” threshold of 70 ng/L for each chemical or their sum, only one facility exceeded the threshold, but all 50 drinking water samples tested positive.

The Environmental Working Group in Washington, D.C. thinks that 70 ng/L standard is too loose for health protection and estimates that up to 110 million people are served by PFAS-contaminated water supplies, the effect of which is cumulative. According to a report appearing in Science:

The stakes surrounding studies of PFAS prevalence, concentrations, and human health impacts are immense. Stricter standards could force U.S. drinking water suppliers to spend hundreds of billions of dollars to remove the chemicals. And they could require those who used the chemicals — including industrial facilities, firefighters, and the U.S. military — to pay for cleanups and potentially even damages for people who can show their health was harmed by the substances.

Nonstick pans are a wonderful invention, saving cooking oil, preserving essential flavors in ingredients, and easing the chores of dishwashers. It is small wonder that nonstick pans are now 90 percent of the aluminum pan market. But wait a moment. Think about this. The reason that foods don’t stick to nonstick is fluoropolymers. Sure they are convenient, but at the end of the day there is no free lunch. At 500 degrees F (260 degrees C) fluoropolymers split into smaller plastic fragments. The coating begins to break down, and toxic particles and gases, some of them carcinogenic, are released. It is sometimes possible to see when this has happened because the surface degrades, losing its characteristic smoothness and making it more difficult to clean. But even before that happens, the polymers can break down at the molecular level, and you wouldn’t necessarily see the damage.

At slightly higher temperatures — 660 degrees F and above — coatings give off invisible fumes strong enough to cause polymer-fume fever, a flu-like condition indicated by chills, headache, and fever. The best known non-stick plastic is Teflon, found in heat-resistant, low-friction coatings, such as nonstick surfaces for frying pans, plumber’s tape, and water slides. It was discovered during World War II as a secret part of the Manhattan Project’s process to refine uranium for the first atomic bomb. At 680 degrees F (360°C), Teflon releases at least six toxic gases, including two carcinogens.

The popular magazine Good Housekeeping, after commissioning its own study, made these recommendations:

Any food that cooks quickly on low or medium heat and coats most of the pan’s surface (which brings down the pan’s temperature) is unlikely to cause problems; that includes foods such as scrambled eggs, pancakes, or warmed-up leftovers. And many other kinds of cooking are safe as well: In [our] tests, the only food prep that yielded a nonstick pan temperature exceeding 600 degrees F in less than ten minutes was steak in a lightweight pan. But to be cautious, keep these tips in mind:

● Never preheat an empty pan. Each of the three empty nonstick pans we heated on high reached temperatures above 500 degrees F in less than five minutes — and the cheapest, most lightweight pan got there in under two minutes. Even pans with oil in them can be problematic; our cheapest pan zoomed to more than 500 degrees F in two and a half minutes.

● Don’t cook on high heat. Most nonstick manufacturers, including DuPont, now advise consumers not to go above medium. To play it safe, set your knob to medium or low and don’t place your nonstick cookware over so-called power burners (anything above 12,000 BTUs on a gas stove or 2,400 watts on an electric range); those burners, seen more often in recent years, are intended for tasks such as boiling a large pot of water quickly.

● Ventilate your kitchen. When cooking, turn on the exhaust fan to help clear away any fumes.

● Don’t broil or sear meats. Those techniques require temperatures above what nonstick can usually handle.

● Avoid chipping or damaging the pan. To prevent scratching, use wooden spoons to stir food, avoid steel wool, and don’t stack these pans. (If you do, put a paper towel liner between them.) How long can you expect your nonstick cookware to last? DuPont’s estimate, based on moderate usage, is three to five years. Some experts advise replacing your nonstick cookware every couple of years. What should you do if the pan does become damaged? A clear answer: Throw it out.

Another danger of nonstick pans comes from the chemical used to manufacture the fluoropolymers, PFOA, which is associated with tumors and developmental problems. After paying $343 million to settle a lawsuit in 2004, DuPont agreed to phase out PFOA, and did by 2015, but many older pans may still have the coating. PFOA is still on the market, however, in microwave-popcorn bags, fast-food packaging, shampoo, carpeting, and clothing. Studies show that most of us have PFOA in our bloodstreams, and babies show trace amounts at birth. Those yoga pants you love may be killing you.

We would like to think that somewhere in government there is a federal agency watching out for our health and protecting us from products like these, but at the moment, that agency seems to have been acquired by hostile takeover, and is now bent upon protecting industry profits, heedless of the public health costs down the road, or the health of all the many non-human creatures now absorbing PFOA from the environment.

We have, through accident or design, structured the human ecology into a zero sum game, where a few in lucky positions can succeed by beggaring their many neighbors. This game has no good ending, as we have learned by playing it over and over for millennia now. We can, by better design, structure human ecology into a win-win-win game, where not only ourselves and our neighbors benefit with each roll of the dice, but so too does the previously ignored architecture of Earth’s biology. We can redesign our losing economic system to benefit all parts, the way Mother Nature does. After all, we invented this thing we call economics (although Hazel Henderson says it’s really just thinly-guised politics masquerading as an academic discipline). We can reinvent civilization, bringing new and better minds to the task. We can replace Pharaonic memes with a distributed ledgers, assigning value grounded in ecological restoration and sustainable development achievements.

A regenerative culture is wise enough to leave in place to later generations a natural world that is more resilient, more capable of meeting the cascading demands of its uncertain future, and better able to repair damage recklessly done. First, let us get rid ourselves of the idiots who shill for polluters, and their Pharoahs, and then let us set about the real work at hand. We can do without the non-stick cancer-causers. This is a sticky meme.

Portions of this essay were drawn from the forthcoming book, Transforming Plastic: From Pollution to Evolution.