"China’s real wealth is not yuan but cherry blossoms." 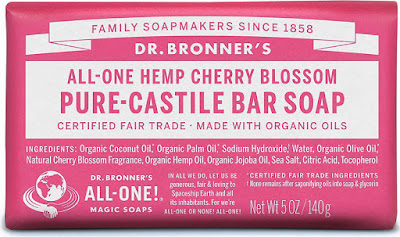 No longer having a television at home I occasionally, stuck in a hotel room overnight, will turn to the luminous box to see who is speaking and listen to what the conversation is about.

In the USA the content is usually so banal and rote that I can only stay with it a few moments, flicking around the channels in search of something more enlightening. Most of it seems as though it were designed by Edward Bernays to addict some faceless, brainless masses and make them more easily controlled. It is no different in Russia or China, or anywhere else in this respect—a very inexpensive and relatively effective mental reform school or internment camp. 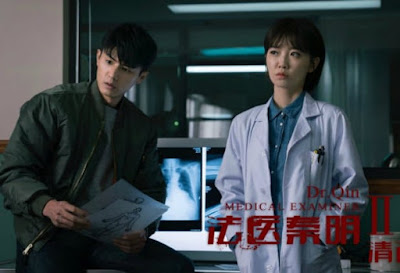 Nighttime fare in China can include Game of Thrones, Handmaid’s Tale and Peaky Blinders, same as in the West. You can also watch old episodes of Batman, Twin Peaks, China Beach or Star Trek. What was interesting to discover in China, however, is the soaps.
There are no daytime series that revolve around homosexuality and adultery. The gay-themed show Addicted was pulled by censors who said it exaggerated the dark side of society.

Chinese TV leans towards relatively few genres for their daytime dramas. Many have historical settings the way the US does with its westerns, colonials and WWII. In China these range from costumed set pieces of Medieval dynasties, with court intrigues, sword battles and steamy love affairs, to wartime novellas with Japs as the Nazis (at the same time, a few channels over on CCTV news, we can watch Li Xinping forging stronger ties with Shinzō Abe at the Asian Economic Summit). The Second Sino-Japanese war (1937-1945) still burns in the memories here, much the way the first 9/11 does for Chileans, or Fallujah will for Iraqis generations from now. 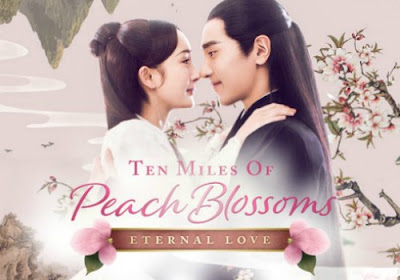 Most popular at the moment is the flying kung fu romance story, Three Lives Three Worlds, also called Ten Miles of Peach Blossoms. Number two is Dr. Qin: Medical Examiner. Crime dramas are also big. Doctors, lawyers and detectives are starting to pluck eyeball counts from sorcerers and princesses.
Clicking through the channels I stopped at one that had a lovely backdrop of cherry blossom time. I can’t tell you the name because it was all Chinese and so far Google images hasn’t helped locate it. As I came into the story I thought at first it was a movie because it was so well filmed. A somewhat plump woman was trying to land a job in an outdoor countryside restaurant, and after being told by the owner he had no work for her, she made some delicious food in her wok and took it around to the tables singing as she went and giving servings to each of the guests, who tasted and applauded her. Later, the owner collected the tips and brought them to her, offering her a job. Seeing how poor she and her three children appeared, he also gave them a bag of corn and some other food to take and then she and her young ones left and climbed the mountain back to their village in the rain, wearing her wok as a hat.
There we learn she is the main provider for her sister and her mother also, and every day she and her children work the fields before journeying to the restaurant to work. Where is dad? Cutaway to the city and here is dad, his hair starting to grey but his body still muscular as he shovels coal and digs ditches. He scrapes by and saves money, ignoring the easy temptations of the city. Then one day his young friend takes him downtown and as they wander a busy alley filled with shops he hears a familiar voice shouting angrily at a customer who did not pay.
He stops at the outside of a beauty parlor, really just an open alcove with a chair, mirror, and lights, and stares at the young woman cleaning up after the customer she has just ejected. He steps up into her light but she does not look up, she just tells him to take the seat, he is next.
Remember, I don’t actually speak Chinese. I am lip-syncing here, but the acting is good so I will risk it. Anyone familiar with this series, feel free to correct my version.
He obediently sits, expressionless, and she distractedly throws a towel around his chest, stirs some water and begins to shampoo his hair. It is only then she looks up into the mirror and sees his face. It is her father.
Fighting back tears, she continues to massage his scalp with shampoo and pretends she is someone else. He listens quietly and only when she is done speaking, he begins to speak, softly, of how much he and her mother have missed her, how they wondered how she is doing, and when she will return. Tears are now streaming down her face as we see them both in the mirror.
She now switches to her true identity and tells him that she has missed them also, but that her business is doing well, she is prospering, and that she will not return with him. He begs her. He is crying now too. Her fingers have stopped moving through his scalp. They both weep.
She gives him a roll of bills to take home to the mountain. He at first refuses, saying he only wants her to come back with him. She will not, so he takes the money and leaves.
Back in the mountain village, which is always stunningly beautiful, he returns to great rejoicing by his family who are eager to hear of his time in the city. He puts the money he earned on the table and his mother seems very proud. His wife says she has work now and he can remain if he wishes. Then he puts the second money wad on the table. They all stare.
When he says it is from the daughter, his wife becomes outraged at him for not bringing her home. He explains that he tried and failed, but that she is happy in her new life and sends her love. All weep.
Like any soap, this episode was preceded and succeeded by scores more episodes recounting the rural/city life of this one family. I had only stumbled into one vignette, but I thought it was so well scripted, well made and well acted it should be on Netflix or Amazon Prime. 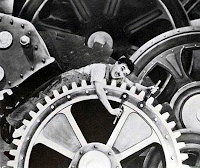 The bigger backdrop, of course, is ongoing globalization that is just as traumatizing as was the Second Sino-Japanese war, the Great March or the Mongol conquest. Families that have lived in balance with nature in the same place for hundreds of generations are being cast off their lands, atomized, and assimilated into Charley Chaplin’s Modern Times.
Chaplin’s prophetic vision of this experience was explained by film critic Gregory Stephens:

The man-eating-machine theme came to Chaplin at age 12. Apprenticed to a printer, he found himself dwarfed by a huge printing press. “I thought [it] was going to devour me.” As an adult he reframed this view. Charlie is a trickster (playfulness is the essence of monkey-wrenching), and the machine has swallowed something indigestible, giving it indigestion. In the second lunch-time feeding, all but the mechanic’s mouth has been immobilized. If in the earlier scene, the machine-men had tried for force their workers to ingest progress, on this lunch break, Charlie has engineered a bit of humble pie. Work and the irascible mechanic’s mouth are brought to a standstill. Soon this scene devolves into something like a loving son feeding his invalid father. That he first attempts unsuccessfully to feed the mechanic through an oil funnel, and then successfully through the opening of a whole cooked chicken, seems to suggest the need for both mechanic and machine to be brought closer to natural processes. 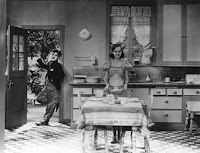 And so we stand, like Chaplin, staring down the gullet of the all-devouring machine. It is hard to imagine how China can possibly back down off this perch and return to its Confucian and Taoist values, those Li Xinping has called its “Mountain of Gold.”
Eco-civilization lies up that winding mountain trail, not down in the grimy city. China’s real wealth is not dollars, rubles or yuan but in those cherry blossoms.
If soaps are a reflection of innermost desires, the Chinese people want this, and miss it, even if they cannot quite see how to get there yet.
Posted by Albert Bates at 5:00 AM

I watched 10 Miles of Peach Blossoms on YT here in the rural midwest; I think the studio is proud of their cinematic advancements and share of online views. Imagine a series with popular actors staged at the eco-village you write about. Through a melodrama you could demonstrate to a generation facing collapse all the lessons currently trapped in science circles.