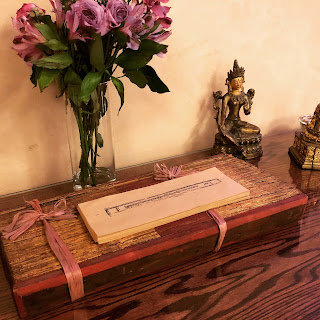 The Vajracchedikā (Diamond Cutter) is a small book belonging to the Mahaprajñāpāramitā (Perfection of Trancendental Wisdom) part of the canon of Mahayana Buddhism that includes thousands of volumes. The Prajñāpāramitā scriptures ordinarily comprise 21 books, contained in 100 volumes of approximately 1000 pages each. Like many of the sutras, the Diamond Cutter takes the form of a dialog between Shakyamuni Buddha and his students that took place about 2500 years ago in an open courtyard in India.

The Diamond Cutter was first translated into Chinese by Kumāravīha about 300 C.E. and he called it simply the Diamond Sutra. English translations by W. Gremmell in 1912 and D.T. Suzuki in 1935 followed Kumāravīha’s convention. Going back to original texts, Geshe Michael Roach restored its original title.

There are many lessons to be taken from this sacred text. One is that salvation is not, contrary to what the multitude is led to believe, purchasable by good works. It is not by the giving away of worldly treasures, however inconceivably great, that matters, but by practicing and disseminating to others clear mind, compassion and grace —  the buddha-dharma.

The sutra ends with a four-line gatha:

“A shooting star, a clouding of the sight, a lamp,
An illusion, a drop of dew, a bubble,
A dream, a lightning’s flash, a thunder cloud
This is the way one should see the conditioned.”

To W.Y. Evans-Wentz and other Western interpreters, the Diamond Sutra takes its title from the power of the vajra (diamond) to cut things as a metaphor for the type of wisdom that cuts and shatters illusions to get to ultimate reality. Geshe Michael would say this is a close approximation, but misses the essence.

A closer translation has to do with the attributes of Carbon.

The sixth element on our Periodic Table has 6 protons, 6 neutrons and 6 electrons. All carbon is formed in a rare, triple-alpha event that happens at the death of a star. At the moment of death, a “helium flash” lasts only seconds but fuses 60–80 percent of the helium in the star’s core. During the flash, the star’s energy production can reach approximately 100 billion solar luminosities, comparable to the luminosity of a whole galaxy. As the dead star contracts, carbon is expelled from its outer layers and drifts off on the winds and tides of space. Sooner or later those molecules wash up onto the shore of some distant orb, such as Earth.

Carbon forms a building block for organic life because of its versatility. It is stable and tetravalent — making four orbiting electrons available to form covalent (shared-electron) chemical bonds. The atoms of carbon can bond together in different ways, termed allotropes of carbon. Carbon can even form covalent bonds with other carbon atoms, which in turn can share electrons with others and so on, forming long strings, complex branchings and “head-to-tail” rings of carbon atoms. No other element does this. 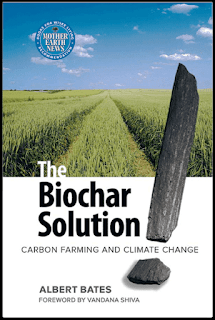 When a carbonaceous rock slides into a volcanic lava tube or magma chamber, it is heated to thousands of degrees and re-cools slowly under the weight of enormous pressure from overlying rock. Under these temperatures and pressures diamonds form. Amorphous carbon has a density of 1.8–2.1 g/cm3. Biochar, which is crystalized by pyrolysis (heating in the absence of oxygen) at 500 to 1500°C, has a density only slightly greater — about 2.2 g/cm3 (and other miraculous attributes).

Diamonds have a density of 3.5 g/cm3, nearly double that of normal carbon. On the Mohs hardness scale diamonds are a 10, the hardest substance known. In its purest form, a diamond is perfectly clear in all planes, no matter its thickness —  it is invisible.

How then are diamonds cut? The answer is simple — by other diamonds, typically by finding a weakness, such as a shear plane, in the stone being cut.

When Geshe Michael was told by his lama, Khen Rinpoche, “get a job, oh and by the way, don’t reveal that you’re a Buddhist monk,” he commuted from the Buddhist monastery in New Jersey to the Diamond District of Midtown Manhattan, on West 47th Street between Fifth Avenue and Sixth Avenue.

He may have thought it amusing to seek work in an industry that bore the same name as a major doctrine of Buddhism. As he tells the story in his autobiography, The Diamond Cutter, restoring the original meaning to the title of the sutra also meant restoring one of the Buddha’s overlooked teachings.

That which cuts diamonds is the understanding that neither diamond nor cutter have actual existence. That which exists is clear mind.

We are traveling at the moment and don’t have regular opportunities to post, so we have written this ahead of time, to release in the place of our regular weekly installments. This is third in the series. Next week we will seek a permaculture view of the Diamond Mountain retreat center in Arizona.
Posted by Albert Bates at 8:00 AM

how do you know all this stuff !@ I kept looking for the footnotes! and catching my breath.
You're keeping us in suspense about Geshe Michael...
What did Stephen teach in likeness to the Diamond Cutter?

Ian. I am in Mahashrashita India and very lucky to get brief internet to okay your post.

Stephen and Geshe Michael came from different lineages and there are doctrinal differences between Soto Zen and Tibetan Buddhism. I immediately recognized that when I sat with Geshe Michael and listened to him interpret a little known commentary on the Diamond Cutter. Stephen would have had a very different interpretation of that passage. To paraphrase another Tibetan adage, irreconcilably being a teacher of the true way, is not necessarily to be avoided. I believe my concluding passage here would find concordance with both schools, although it comes from independent realization at the age of 22, before I came into contact with either.

I Have Read Your Post This is very nice and informative blog . Thank you for sharing such like of information.
https://blog.mindvalley.com/diamond-sutra