The I-40 Highway of Shame

"It is good to remember that Milošević ended his days in prison in The Hague for the Bosnian cleansing while Jackson still graces our twenty-dollar bill." 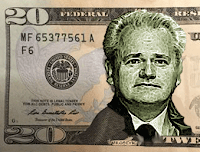 On Interstate 40 one leaves Fort Smith, Arkansas, crosses the Oklahoma line and immediately the place names begin to change from words like VanBuren and Muldrew to words like Sallisaw, Tahlonteeshee and Checotah. Highway exit signs point to Broken Arrow, Shawnee, Tecumseh. We pass from Sequoyah County to Cherokee, Muscogee, Okmulgee, Okuskee, Seminole, Pottawatomie. Finally the signs become very dark: Washita, Custer, Black Kettle National Grassland. It is not a cemetery. We are passing through a mass grave. This is what it looks like after an ethnic cleansing. Oklahoma is a museum of genocide.


“I am Shawnee. My forefathers were Shawnee warriors. Their son is a warrior. … Sell a country? Why not sell the air, the clouds and the great sea, as well as the earth? Did not the Great Spirit make them all for the use of his children?”

In the years before the American Revolution, the Creeks and the Choctaws had reached the greatest extent of their range and population. Their huge inland confederation, still relatively untroubled by European pressure for their land, could muster thousands of warriors from hundreds of towns to repel invaders. After the American Revolution their fortunes changed. Southern plantation farmers and land speculators moved into their lands, forcing the government in Washington to pressure them into treaties to cede lands. Among the Nations, the people were divided between the pro- and anti-invaders. 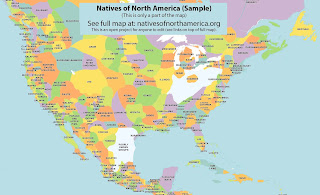 Several thousand Choctaws and Lower Creeks came to the rescue of a severely disadvantaged Andrew Jackson in Tennessee in 1814, nearly wiped out the Upper Creeks to rescue Jackson's troops and enable them to march on New Orleans with a combined force capable of defeating the British. A few months later, Jackson forced the Lower Creeks to cede 8 million acres, about 2/3 of their territory, as a way of saying thank you.

The election of Jackson to the Presidency in 1828 was even more disastrous. Thirteen hundred Creeks migrated voluntarily from Georgia to West Arkansas. The remainder consolidated in Alabama, where an English traveler described them as poverty-stricken, hungry, and ill clothed, “wandering about like bees whose hive has been destroyed.”

Jackson might be better thought of as the 19th Century USA's Slobodan_Milošević,  it is good to remember that Milošević ended his days in prison in The Hague for the Bosnian cleansing while Jackson still graces the federal twenty-dollar bill. Jackson wanted the South cleansed and all native nations moved West of the Mississippi. Although opposed by the majority of the population and our outspoken congressman, David Crockett of Tennessee, Jackson was able to gain Congressional passage of the Indian Removal Act of 1830, extinguishing Native American title to lands in the Southeast.

The Choctaws were the first to feel the cruelty. During the next four years some 4000 of the 13000 Choctaws sent West died of hunger, disease and exposure. White settlers moved in and seized the best native lands, houses and livestock. The Cherokee capital city of New Echota was auctioned off, house by house. In 1836 the reluctant Creeks were removed in chains and manacles, and thousands died on a forced winter march. An estimated 45 percent of 22,000 Creeks never reached Oklahoma.

During the winter of 1837-38 the last of the Southern Nations were moved out at point of bayonet. Between the Ohio River and the Great Lakes, Pontiac's Ottawas, Little Turtle's Miamis, Tecumseh's Shawnees, Black Hawk's Sauk and Foxes, and many others moved first to present day Iowa and Kansas, but then were herded into Oklahoma with the already crowded Southern Nations.

In the years that followed, the Native lands in the Oklahoma territories were reduced, tribal councils outlawed, and the region opened to white settlers. In 1907, the lands exchanged in Oklahoma for their patrimony “for as long as the grass shall grow and the rivers run” were seized by the State.

We pass this way on Highway 40, following part of the old Route 66, on our way to and from the 20th Anniversary of the Natural Building Colloquium at the Black Range Lodge in Kingston, New Mexico. What we are doing at both ends of the journey is very hopeful. The part in the middle is just sad. It fills us with grief.

We would just as soon see the US out of North America. Failing that, we quietly pray: May the children next born become worthy successors of those who were here before Columbus.

For thousands of years vae victis was the normative principle guiding conflict between groups of people, be they tribes or empires. It was believed that if one group couldn't hold what they owned by force, they didn't deserve to own it. Might made right.

Although the concepts of universal human rights and universal justice have become widely accepted, I fear that vae victis will soon return to all human relations. Jackson's horrific legacy is secure.

It is important to note that there was a running narrative that solidified the natives as "beggars and thieves" and many other tags that sought to vilify them to the population at large. May we remain aware of any current attempt using the same technique on us to steer us into hatred and fear.