Hope, fear, debt and paranoia have been recurrent themes running through our past month as we traversed the northwest corner of the European continent through Iceland, Britain and Denmark.

Iceland is the country that told the world its bankers are not too big to jail and it will not be blackmailed by London, Bonn, or the European central banks. It is still taken to the woodshed regularly and reminded who is in charge. Icelanders are not free to leave their country or to take money with them if they are allowed to go.

Britain is Europe's bad boy, master of every latest Ponzi scheme and constantly one step ahead of collapse, eking astonishing profits as all about her topple and fall. Denmark is a dreamweaver, whose sheer powers of imagineering seem to emanate an aura that can warp reality. With nothing but fairy dust to back its notes and debts, it is poised to test the durability of its famed social capital when placed in the vice grip of open imigration. Like many former bastions of European liberalism, it has taken a hard swing to the right and is getting set for the clown show that follows.

The United States is far along down the circus trail, having starved its science, educational and social programs for decades while feeding its population a steady diet of numbing pharmaceuticals, mind-rotting television, high fructose corn syrup and GMOs, until they can be readily induced in their coma to vote against their own interests, over and over, producing a government of popular lunacy — clownocracy — a Mad Hatter's Tea Party overseen by Donald Trump, as Queen of Hearts; "a sort of embodiment of ungovernable passion - a blind and aimless Fury" (description by Lewis Carroll).

Debt is a theft of the options of future generations. To escape debt and claw their way back from penury people will rape, plunder and pillage every last sacred resource, leaving not an inheritance but a ruin. Cascading debt may sweep much of civilization away, perhaps in Jubilee, but the damage will have been done to foundations — and be visited as ecosystem death. Every dollar that cannot possibly be repaid in sweat and hours becomes a drain on Earth's operating system. We grew giddy wealthy on our energy slaves. Don't look now, but they just left and winter is coming.

Obstruction is an occupational hazard we accept because we are in the business of bringing hope, otherwise labeled permaculture, or ecovillage, but we are frequently obstructed and overpowered by those other three elements — fear, debt and paranoia. From time to time we break through enough to peer over the horizon and see what might yet be. 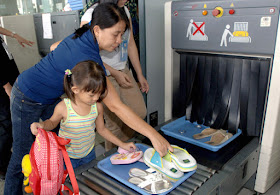 Fear and paranoia are what drive the security state apparatus we encounter most closely and personally when we stand in long lines at airports and then let some gentleman we have only just met fondle our genitals. Of course, we could avoid having our genitals fondled if we would agree to placing ourselves in front of his death ray for a few milliseconds. We know that a few milliseconds won't kill us on the spot but its like buying a ticket in the cancer lottery, and we go through airports often so if we didn't do this fondling ritual we might soon have a shoebox full of such raffle tickets, and who knows? We might win.

Research suggests that anywhere from six to 100 U.S. airline passengers each year may be getting cancer from the machines.  Still, any time you opt out, some brainwashed TSA officer will try to persuade you that scanners are “safe,” or equal to “less than three minutes of air travel,” glossing over the fact that even the lowest doses of ionizing radiation — the kind beamed directly at the body by the scanners and qualitatively not much different in the non-ionizing radiation of millimeter wave devices — will increase your lifetime risk of cancer and inherited damage to your offspring, increasing your and their susceptibility to hundreds of genetically related diseases and disabilities.

It is refreshing to go through airports in Europe and not have to go through these machines because they are banned in Europe and would have been banned in the United States had the scientific or medical community made the call. As it was, the call was made by apparatchiks who skipped the legally required public comment period before deploying the scanners, and bypassed the Food and Drug Administration by waving their Patriot Act, and then, in defending these cruel devices, relied on a small body of unpublished research to insist the machines were safe, ignoring contrary opinions from U.S. and European authorities that recommended precautions, especially for pregnant women. Rapiscan employed Chertoff Group, founded by Homeland Security Nomenklatura Michael Chertoff, to make sure the government worked for them. 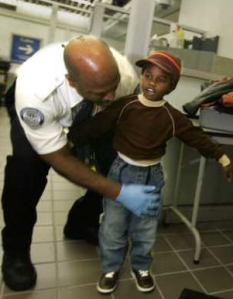 In 2013, under threat of a court order, TSA removed the ProVision, made by defense contractor L-3 Communications, from the most busy US airports but re-installed them in smaller airports, such as ours at Nashville. With the L-3, a passenger enters a chamber that looks like a round phone booth and is scanned with a form of low-energy radio waves which have not yet been shown cause cancer, but only because that kind of epidemiological research can take up to half a century. Nonetheless, the mechanism for DNA disruption is established by research into powerlines and other sources of electromagnetic radiation. Millimeter wave devices like the L-3 re-sequence DNA in dividing cells. Does that sound safe?

A review by the National Academy of Sciences found “no compelling evidence” that there is any level of radiation at which the risk of cancer is zero. Rapiscan and the Chertoff group rake in half-a-billion tax dollars per year because safety advocates, medical community and the FDA cannot get traction against paranoia.

We don't place the rational avoidance of premature death and disability in the category of either fear or paranoia. It is merely good sense. We also know that if even ten percent of people were aware of the risk and acted rationally with regard to those airport scanners and opted for the pat-down as we do, then the whole fake façade of security would come to a grinding halt. TSA might actually re-examine their machine's efficacy and decide to do as they do in Europe: junk them.

Which brings us to the Pope and the U.S. Budget.

Watching the Pope speak to Congress from the C-Realm watchtower in Brooklyn we were struck by how uncomfortable the Speaker of the House, Hon. John Boehner, a devout Catholic, seemed during that part of the speech, so passionately phrased and delivered, about not falling into a polarized view of the world. The whole Republican plan for world domination is based on repeating the mantra, “Be Afraid, Be Very Afraid.” This is how they can get away with not releasing the Senate Committee Report on torture, fight trillion-dollar wars against countries that have not threatened them, dig deeper data mines for blanket surveillance, and why you have to take off your shoes at US airports but not abroad.

In 2001 “Shoebomber” Richard Reid attempted to detonate explosives packed into his shoes while on an American Airlines flight from Paris to Miami. He just gave himself a hotfoot, no worse, but he is now serving 3 consecutive life terms without parole, plus 110 years, in maximum security prison. There was also an underwear bomber on Christmas Day, 2009, using about the same size device, made of identical plastic explosive, but for some unexplained reason no one asks us to take off our underwear.

There is also no reason to imagine that the plastic explosive used by both the Shoebomber and the Underwearbomber would be detected today any better than it was in 2001 and 2009. It would pass right through x-rays and scanners without looking any different than any other shoes, underwear, belt buckle, book or briefcase. The scanners are useless as detection devices, but useful to keep an entire population frightened, and that is the idea. It is about polarization. Us and the Muslims, the rich and the rabble, survivors and zombies. 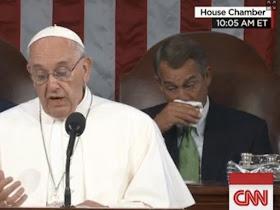 The Speaker, seated a few feet behind the Holy Father, was fidgeting and then wiping tears. Right afterwards Republicans voted to drop their usual budget blackmail and avert yet another government shutdown, saving billions in tax waste and fraud, and the next morning after attending mass as he does daily, Boehner, the highest ranking member and third in line to the Presidency, announced he was retiring from politics at the end of October, giving only one month's notice. He said he came to the conclusion after morning prayers that “today's the day I'm going to do this. Simple as that.”

Michael Moore called this the Pope's first miracle. "God knows what’s next over there,” House Democratic Leader Nancy Pelosi told her staff members. “Coming from earthquake country, this is a big one.” Boehner "blamed the House’s hard-right members, who he said were unwilling to govern," which was, of course, the Pope's point.

A delicate balance is required to combat violence perpetrated in the name of a religion, an ideology or an economic system, while also safeguarding religious freedom, intellectual freedom and individual freedoms. But there is another temptation which we must especially guard against: the simplistic reductionism which sees only good or evil; or, if you will, the righteous and sinners. The contemporary world, with its open wounds which affect so many of our brothers and sisters, demands that we confront every form of polarization which would divide it into these two camps. We know that in the attempt to be freed of the enemy without, we can be tempted to feed the enemy within. To imitate the hatred and violence of tyrants and murderers is the best way to take their place. That is something which you, as a people, reject. 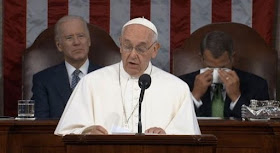 Perhaps the Pope gives USAnians too much credit. Still, the line about “to imitate the hatred and violence of tyrants and murderers is the best way to take their place” has real substance in the context of the Bush/Cheney legacy. Paranoia is in the driver's seat in Washington. It is not a rational fear, based on real enemies. It is an irrational fear based on a perverted sense of entitlement and the perceived but incorrect need to protect your superabundant ill-gotten gains from forceful repossession by their rightful owners.

Ironically, this has been the racket of the Holy See for a couple millennia. What's more to be feared than burning in Hell for all eternity? Is that what John Boehner thought about in his morning prayers?

If he is changing his life now and wants some real hope, we will be offering more permaculture design courses next Spring.