Is it Hot Enough Yet?

"Fudging the dates to make it seem like we will cross the 2 degree threshold in 2018, however, is as egregious as any of the denialist claptrap funded by the Koch brothers or Scott Pruitt."

In January 1976, at a meeting at the Washington Sheraton, Ralph Nader introduced me to a spy who had come in from the cold. His name was David Dinsmore Comey and during the Second World War he had worked in OSS, trying to head fake the Third Reich about where the landings would come for the Allied invasion of France. He was a real life spook.

In 1975, the Atomic Industrial Forum had invited Comey to tell the nuclear industry how it could be more credible with the public. He was a high-priced consultant; not a lobbyist — a historian. Comey gave them his hard-won wisdom. To become credible you must tell the truth.

As Comey told us a few months later at this party Nader had thrown, the way the OSS deceived Hitler was by always being accurate in its leaked communications. Sometimes the Allies had to take painful losses in order to gain the Wehrmacht’s trust. But when the final invasion came, on June 6, 1944, it was not at Pas-de-Calais, where Hitler had positioned his SS Panzers, but at Normandy, where the battlements were manned by boy scouts (Hitlerjugend). Fake out.

Comey had told the nuclear industry’s spokesmen to become credible they must tell the truth: admit that low-level radiation causes cancer and long-term genetic effects; confess that important safety research has never been done, or done improperly; reveal all the hidden and external costs, both present and into the future; acknowledge there is no solution to the waste issue; and perhaps most importantly, “Talk about the ethics of consuming electricity from fission reactors for 50 years and saddling 20,000 future generations with social and environmental problems.”

On that day in 1976 at that swank hotel in the District, Comey flipped his speech over and gave the same advice to the anti-nuke stalwarts — ourself, Dana Meadows, Harvey Wasserman, Pat Birney, Kay Drey, Anna Gyorgy, Tony Roisman and others. He warned us that we didn’t need to embellish the truth. It was our strongest ally. Moreover, it was our ally alone, at that moment. He said he was perfectly confident that the nuclear industry would never follow his advice, would never tell the truth, and would never be credible.

Fast forward 42 years and we see that Comey was absolutely right about one thing. The nuclear industry has never taken his advice.

Sad to say, neither have many in the social activist community. Until recently that was less true of climate change than of other movements, but it is human nature to embellish a good story, even when not required.

Below is a 2018 NASA chart of global surface temperature anomalies from the 1880 baseline. It appears to show a gradual ascent in year-to-year average temperature, approaching 1.5 degrees C in 2015 and then declining slightly. 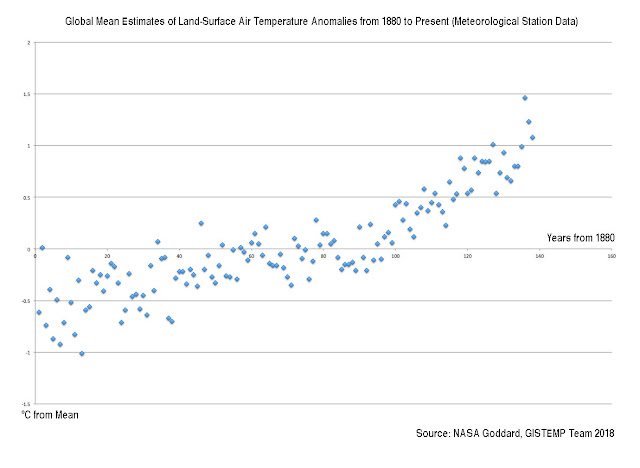 If we were to plot two smoothing lines to forecast the direction, they might look like this: 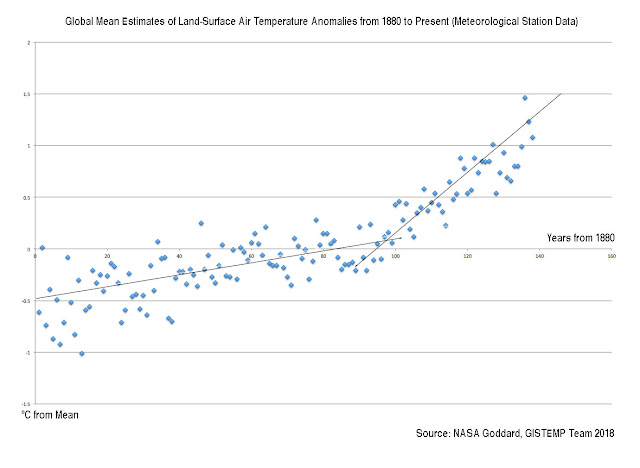 Following out the second, steeper trend line, we can project that 2 degrees would be reached some time around 2040.

Regrettably, many in the climate activist camp are re-posting this conceptualization of that same data by Sam Carana for Arctic-News: Leaving aside the errors in the data points for 2003–2017 that appear to have been selected from the 1880–2017 data set and then dates changed, the “third order polynomial trend added” by Carana is fitting an exponential curve to the chart such that the upward tick beginning about 50 years ago is only the first stage of a bend towards vertical.

Carana could be right.

At this point, however, he is only speculating, and the curve could as easily revert to norm as shoot skyward. Fudging the dates to make it seem like we will cross the 2 degree threshold in 2018, however, is as egregious as any of the denialist claptrap funded by the Koch brothers or Scott Pruitt.

Carana then extrapolates on his fudged data to confidently predict that between now and 2026 (8 years from now) average global surface temperature will rise 8.1°C (14.6°F) from an annual average temperature of 56°F in 1880 to an average of 74°F in 2026. Carana’s arithmetic then forms the basis for dire predictions by Professor Guy McPherson and others that humans will go extinct within 10 years.

Returning to David Comey’s advice, we have to ask why activists should bother to exaggerate. Isn’t the story scary enough without embellishment?

Thanks for reading! If you liked this story, please consider sharing it around. Our open banjo case for your spare change is at Patreon or Paypal.

I have often wondered how Carana picked his exponential curve formula because clearly there are many shapes of polynomial functions. I hope he will notice this post of yours and respond.
But also clearly, biological processes with feedback will almost always not be linear, so a straight line projection is equally misleading.
I wonder what JeanMarc Jancovici the french climate scientist would say? https://jancovici.com/en/ He seems to be a clear-sighted analyst of the data.
Or what Rob Mielcarski at un-denial.com would say, or Gail Tverberg, the actuary.
We need to get a fix on the best fit trend for our last GAST (global average surface temperature) (I made that up )

I don't know if it is necessary to continually rely on theories (past or present) to get a grip on our collective predicament as a species, on a planet that we're doing harm to, largely on the basis of our unrelenting want of more stuff or pleasure. Cleaver theories, however well articulated or thought out, tickles our need to feel or imagine that we found some unified envirotheory (I made this up) that will eventually lead to some type of real action either top down or bottom up. The truth is we need to push forward, as locally as possible, doing what we can do and being an example. There will be no policy change, at least here in the USA, that will address our absolute need to reinvent how we've lived.

I've had the privilege of downloading the global historical data series, wrote software in C++ to select and process data, and I even implemented area averaging as published in J Hansen's earlier papers, and my resulting graphs and figures looked very close to published.
In a past existence I also did power function fits to pressure vs flow relationships to derive index of nasal airways resistance. For these sort of things, the choice of least squares minimization function to data points, needs to be backed by some understanding of the physical situation being modeled. Studies of earths past have never described such rapid rise , almost a step change, in CO2, over such a geological short time, which is almost a step change in earth's effective radiation imbalance.
Heat accumulation is at a steady rate, which decreases as earth's temperature moves up to correct for the radiation imbalance. Despite many major positive feedbacks, which cause greenhouse gases to further rise as does the temperature. It seems to me that earths systems are already responding close to the maximum possible. I imagine this is set by heat capacity of oceanic waters. We should hope that the heat exchange rates of ocean surface to cooler, deeper oceans keeps working, and sets a maximum rate of system warming.
Various convection, salinity, deep to surface ocean mixing currents may fail, as they may do as the driving deeper layer cold reserve gets used up, and warmer surface becomes stagnant and stratified. So far its been suggested that faster land-locked fresh water ice shelf melts help to negate the ocean current drivers.
That is when the surface rate of warming could jump to a higher rate. Until then, I expect global warming will be more or less linear at current rates, as we keep pushing up the greenhouse gases as fast warming temperatures try to decrease earth's radiation imbalance.
We need to look after the condition of our oceans much more carefully than we do now.
Sam Carana's curve fit is wrong because there is no real attempt to justify connection of the exponential function fit to the actual physics drivers of the system. Until there is major change in the physics drivers of earth systems, expect more or less the same ongoing rate of rise of global average (land + ocean) surface temperatures, which is alarming enough already.