In the Land of the Long White Cloud

"Off to the northwest lies the Shire — we passed through Hobbiton only yesterday. Lake Taupo, which is beautiful in the fall colors, is this rugged land’s stomach." 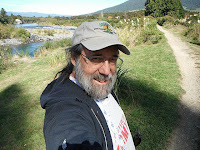 Before the end of the Age of Homo Petroleo, we’d like to travel to places we are unlikely to see again once jet fuel becomes prohibitive for commercially-viable air travel and in that time before sail transport can scale up to sate our wanderlust. We expect it may take quite some time for forests of hard mastwood to grow out to maturity once more, even in the tropics, and even longer for wooden boatbuilders and worthy sea captains to relearn extinct skills.


This month we are in New Zealand. Next month our journeys take us to Alaska.
Before the beginning there alone was Io, Io-the-parentless, Io-the-endless, Io-the-timeless, Io-without-limit. 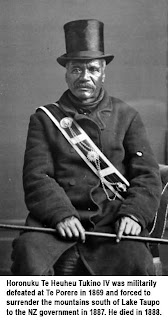 He moved and the Great Nothingness was born. In the spiralling currents it followed itself and searched. It found heart and became ignited. It thought as does a mind. And desired as does a dream. It took form and breathed. And in a second that was a million years, it multiplied and grew. To become a shadow. A darkness. A night. A night of gestation. A night for bearing the Ancients.
There was Ranginui, the virile male, sky-bound and active. There was Papatuanuku, the female, land-bound and passive. They breathed together as lovers and in the Night-that-knows-no-end there were born to them seventy mighty sons. There was Whiro-the-dominant whose wrath was as an axe upon the tree, and Tawhiri-of-the-elements, whose breath was the wind itself. There was Tangaroa-of-the-seas, whose ceaseless waves would chisel away the land. There was Tu-of-the-red-face, by whose hand mankind would know war, and Turongo-the-gentle who would lay down the foundations of peace. There was Haumia-the-abundant who was lord over the fruits of the earth and Ruaumoko-the-lastborn, whose one tiny movement would cause the earth herself to quake and tremor. Finally there was Tane-the-thoughtful, whose actions and deeds would produce the world and all its parts. 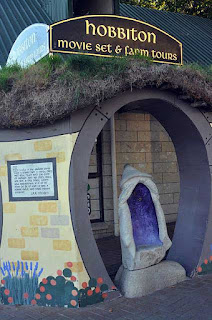 Aotearoa is an unusual place to host a permaculture convergence. The previous ten Australasian Convergences have been in Australia. There are some 70 Ozzies here this time, but there are more than 400 others, many from other countries. As if to presage the emergence of glocalization, the majority come from right here, Aotearoa, or what the  Pakeha (Europeans) called New Zealand. We will be reporting more from the Convergence, but we wanted to give our first impressions of this place.
We are in Turangi, in the Lake Taupo bioregion, where a crystal clear trout stream runs down from still active volcanoes, the ones pictured as Mordor in Lord of the Rings. Off to the northwest lies The Shire — we passed through Hobbiton only yesterday. Lake Taupo, which is beautiful in the fall colors, is this rugged land’s stomach. The soils are so rich that the best farms raise racehorses and the forests produced Ithilien, where Sméagol chased and caught a fish near a waterfall.
It was Tane who separated their parents to produce the sky above and the land below. And when his grieving parents' tears filled the world, he turned his mother over to stop Ranginui from having to look upon her face and be reminded of their separation. 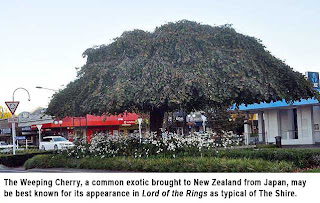 Tane brought light to the world by placing the stars in the sky, the sun at its zenith and the moon lower down on his father's head. He build the first house of nobility and it remains to this day the blueprint from which all homes are templated. He filled it with the knowledge of the gods, which he retrieved from the summit of the heavens at the instruction of Io-the-creator himself. He produced the trees, the birds, the insects and fish to clothe and adorn his mother, the earth. Finally, he created the first human, a woman from whom all peoples are descended. The world of eternal light where all beings were kin, no matter who or what, was born.
Many times did summer and winter struggle in rivalry before Maui-of-the-topknot, half-man, half-god, was gifted to the world. Raised by his priestly elder, Tamanui, he was shown the secrets of the universe; the kinship that existed between all things that would allow him to take on the form of the tree, the bird, the fish, the lizard. He mastered himself and returned to his family ready to conquer.
With a fearless heart he secured the magic jawbone of knowledge of his ancestress Murirangawhenua. And with it he caught and slowed down the sun, which sped across the heavens at will with little thought for the activities of man. He made fire available to people by forcing the very last flame of the Keeper-of-the-fires, Mahuika, to become imbued into the heartwood of the tree. He visited the spirit world to find his father and before his death at the hands of the Goddess-of-dearh, Hine-nui-te-po, he fished up these sacred isles.

Lake Taupo and its smaller cousins formed from the Oruanui eruption, 26,500 years ago. A later eruption in 181 AD was viewed in the sky from Europe and China. The most recent eruption, a minor one, was less than a decade ago. As we biked the bridge over Tongariro River this morning, we were not far from the site of the Great Battle of the Last Alliance, where Elves and Men joined to rid the world of Sauron’s evil. Just up the river lies Dagorland Plain, where the armies of Isildur, King Aragon’s father, met a huge Orc host in 3231 SA. Ten years later Isildur was killed in hand combat with Sauron outside Barad-dûr, but managed to slice off that famous ring finger, which is why Sméagal was able to fish the One Ring from the river not far below this bridge where we can look down and see the shadow of our bicycle.
Using the sacred jawbone as a hook, Maui-the-relentless hauled up his great fish from the depths of Te Moananui a Kiwa, the Pacific ocean. But as he paid homage to the gods for having given him such a wondrous gift, with greed in their eyes and lies on their tongues his four brothers took to the fish with knives. In its death throes it became torn and shredded with gullies and gorges, hills and mountains. In time, the stingray-like fish became the North island of New Zealand while the canoe of Maui became the South Island.
The head of the fish is at [the] capital city, Wellington. The ridge of mountain ranges that run down the center of the island is its backbone. To the east coast and west to Taranaki can be seen its fins. The stomach is Lake Taupo while the heart is at Maunga Pohatu in the Ureweras. Northland is the whipping tail of the stingray. From tip to tip, fish to canoe, can be seen the myriad of extremities of this once virgin land.
And many centuries ago, when the voyager Kupe with his family and wife came upon these islands shrouded in mist and cloud they named them Aotearoa, land of the long white cloud.
[Maori narrative courtesy of Chris Winitana].

The way we see the world is not necessarily “ding en sich,” the thing per se.  Rather, our interpretation colors what we see; how we classify and articulate shades the perception itself. So, whether we elect to pursue a rigid adherence to empirical facts — the receding glaciers and volcanism that left their marks in local topology — or choose frameworks of myth and story — the knife slashes of Maui’s four brothers — matters only at the margin. One view is rich in geophysical symmetry, the other in nuance and revealed meaning.
This richness, and our choice about how to regard it, are all about us, all the time, everywhere. Our choice has always been the liberal view — abiding in all ways, taking solace from all voices, and receiving wisdom of all kinds. This is a very colorful tapestry, even when not perfectly coherent. It is a perfect whatever it is.
Posted by Albert Bates at 11:46 PM